After building a high-tech suit of armor to help him escape captivity, billionaire industrialist Tony Stark improved on his designs and became a 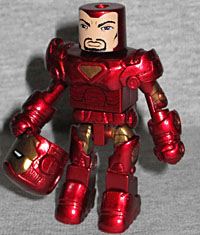 costumed hero. Teaming up with like-mided heroes to form the Avengers, Stark must find time for his role as a CEO; he is also the team's main financial backer.

Wow, this Iron Man. He's got a new helmet, new chest cap, new gloves, new waist, new thighs, and new feet, and yet he still feels like a total retread. His face and abdomen even get new paint apps, and yet I can't being myself to care. It's another crack at the Extremis armor, and it's stll not very good. This torso on the old legs migh be nice, but the colors are different, so forget it. The new thighs are poorly designed: they get so thin at the top that the balljoint socket ends up incredibly shallow, meaning they fall right off at the slightest provocation. 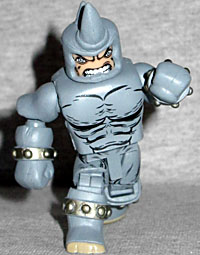 the near-​indestructible Rhino armor. Although he was easily defeated by Spider-Man, he has upgraded his suit over the years, and repeatedly boosted his strength with gamma radiation. He possesses superhuman strength and speed.

Hard to believe the only other Rhino Minimate we've gotten was in 2003, as a hidden bonus figure in a TRU exclusive. And now this one is an exclusive, too (even if the packaging doesn't point it out)! This one is a more appropriate size, thanks to the add-on boots, thighs, waist, gloves, biceps, and chest cap. He has studded bands around his wrists and ankles - a costume feature from the '80s - and lots of painted details on his torso. They could have gotten away with reusing the existing head cap, but designed a new one instead.

Rhino's a nice update, but man does this Iron Man blow. What a shame.
Previous | Next