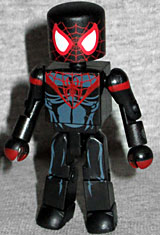 Gaining his powers from a radioactive spider, Miles Morales possesses all of the original Spider-Man's powers - strength, speed, stickiness - plus two bonus-powers: invisibility and a paralyzing touch. When his world's Peter Parker was killed, Miles decided to fill his shoes as the new Spider-Man.

The new Spider-Man costume was designed by Sara Pichelli, and looks really sharp! The suit is mostly black (though given grey detailing here to create anatomical details) with red webbing over the shoulders and head. The webs don't go over the top of the mask, but that's just an effect of the Minimate, not an actual feature of the design. It's not like the webs stop just above his eyes in the book, you know?

The figure's mask is removable, revealing the face of Miles Morales beneath it. When Marvel announced their plans to off Peter Parker and replace him, the reaction of sane people everywhere was "sure, that could be interesting" or "someone who's not Peter Parker in the suit? That's not right," while the reaction of people who are scared of losing their privilege was "this is just political correctness run rampant!" The skintone is pale brown, and there are some surprisingly complex paint apps to create his hair.

Injected with a super-soldier formula that made him 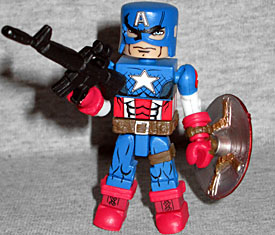 America's secret weapon in World War II, Steve Rogers was frozen in the ice near the end of the war. Thawed out years later, Cap found himself in a world that has passed him by, and learned that his old enemies, the Chitauri, were still a threat to Earth.

This is the second Earth-1610 Cap (modern era, at least: there was also a WWII variant). The colors are more vibrant, and he has rings around his arms and legs to form the cuffs on his boots and gloves. The utility belt is smaller, but there is the addition of a strap around his left leg.

The shield is the movie version, and he has the same left hand as Frontline Captain America for the shield to plug onto without bulking the arm up too much. Also, the hair is the same mold that Frontline had, just in a brighter, comicbooky yellow. On the last Ultimate Cap, we said his face was boring - this time, that is definitely not the case! He's verging on homely.

The TRU Minimates series have always featured exclusive figures, and that's fine - there were stickers on the package to let you know which ones you couldn't get in the mass market releases, and building a full collection was easy. But ever since Series 9, they've been releasing some figures that are not available outside of Toys Я Us and also not marked as exclusives, and that's frustrating. None of the figures in this series are available anywhere else, but only the X-Men and Alpha Flight pairs get identified as such.

So the only way to make sure you get the toys you need is to A) closely follow every bit of Minimates news so you know what's available where, or 2) just buy everything when it hits shelves and sort it out later. No question which one Art Asylum and TRU would prefer, but for us, it's an annoyance. Come on, companies: if it's only available at TRU, put the sticker on it. Why would you not want to advertise something so special?
Previous