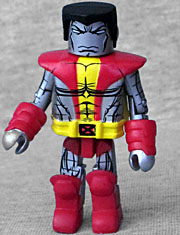 super-strong, nearly indestructible, and able to throw objects a great distance at great speed. When the object is his teammate Wolverine, this maneuver is known as a "fastball special."

This is our third fourth (comic-based) Colossus Minimate, and it's a lot better than the last one. That figure just used the standard Minimate body, while this one has a waist extender, a big sculpted chest cap, wrist band/gloves, and bootfronts to bulk him up. Marvel Minimates Series 47 is all about the X-Men of the '80s, and in the comics at the time, Colossus was locked in his metal form - maybe that's why they made this figure larger.

Also in the comics at the time, Colossus didn't wear this costume. Instead, he ran around nearly naked, 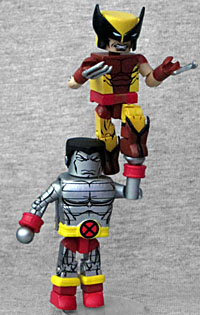 just wearing trunks, a belt, wristbands and boots - so basically, he dressed like a wrestler. To create that look, this set includes an alternate chest cap, plain hands and feet, and yellow bands to fit around his legs. The chest cap is shaped to give the barest hint of anatomy, so the figure still relies on paint to create most of his look. The belt is molded on, and the big X-buckle is painted. His hair is a flat, featureless piece, to better sell the idea that it (like the rest of him) is made of metal.

In case a nearly nude Russian man isn't enough to make you buy this set, he also comes with two replacement hands, one designed to match each costume. The hand is flexed back and has a bump on the palm, like a reverse Repulsor Blast. What is it? Well, that peg is the size of a Lego stud, so it fits the figures' feet. As mentioned in the bio, he's ready to perform a fastball special! 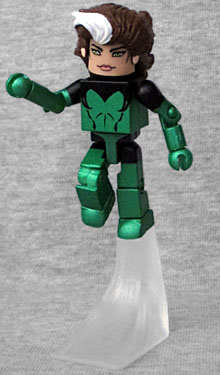 Unable to touch others, Anna Marie saw her mutant ability to absorb memories, powers and life energy as a curse. But after fighting the X-Men as part of the evil Brotherhood, she later sought them out to ask for help and eventually joined the team.

Wow, "Anna Marie"? That definitely wasn't her name in the '80s - it didn't come about until after the first X-Men movie decided she needed a real name. The costume Rogue wore while the X-Men were operating out of the Outback was a continuation of what she'd been wearing before: green clothes over a black bodysuit. The green bits changed pretty regularly before the team relocated to Australia, but afterward they were consistently limited to a bathing suit, opera gloves, and high boots. She also started growing her hair out, so this figure has a big hair block, with a white patch brushed back from her forehead. Since she was still sharing her body with Carol Danvers, she also has a clear one-footed flight stand.
Next