And so it begins again. I ended up leaving home base two hours later than planned, which of course significantly delayed all my best laid plans. I remember when it used to be a two-hour drive from LA to San Diego, but now it's more comfortably 3 hours. For better or worse I'm jaded enough at this point that a "late" arrival on Preview Night doesn't ruin my life. So what I lost in time stuck in slow moving traffic I made up for up in he ease of of just picking up my badge and being able to walk right in to the hall. 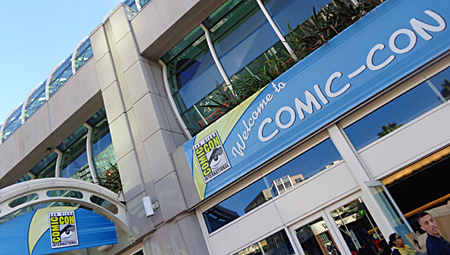 My general M.O. is to hit the floor and see what I can see before unleashing the shopping, and thus it is that I followed suit. Hasbro had out previously announced/revealed stuff and while it wasn't very exciting as a result I must confess the new Star Wars Rebels stuff has a fun feel to it. They also had a 4" Dane Dehaan Goblin on display which was a bit of a surprise considering the peg-warmer-ness of that line and under-performance of the film. 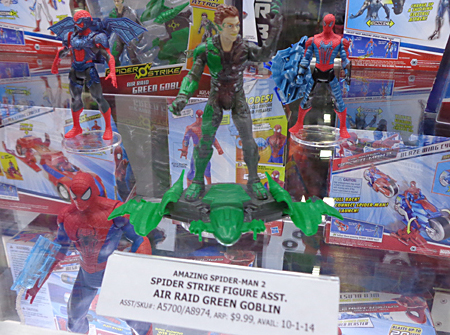 Mattel tipped their hand pretty hard by, for the first time in a LONG time not having a significant MotU presence in the booth theme-ing. Instead... It's all about Hot Wheels now. On the plus side, their new Star Wars license has them rolling out a plastic ship line that excitingly resurrects some of the novelty of Micromachines - let's hope it does so well that Mattel actually does more than the A-List for once. There was also some new Total Heroes figures, which is reassuring for its future. There is also a cool new '66 Batman deluxe set with a ton of accessories and yet another Batman, but at least it comes with a cool unmasked head. Then they revealed the Batgirl figure, and apparently she'll only be available in a 3-pack with Batman & Robin, so I really hope you that two regular Batmen in your collection felt like not enough...

Sideshow had, as usual, a bunch of cool stuff out, including new Ripley figures from Hot Toys. Aaaaaand, indeed, Hot Toys Back to the Future may well break me. Across the aisle DC had a cool Batman museum with a BUNCH of cowls, props and costumes from all the movies. They didn't seem to have a whole new on display in terms of figures, but I gotta say they really seem to be circling back to kicking ass. Even though I have no interest in Arrow and haven't read any of the Greg Capullo books those figures are looking really good.

Mezco had their new "One:12" The Dark Knight Returns Batman on display. That's going to be a very bold and interesting experiment. The figure looks pretty good (except for the cape, which looks like very conventional, bland soft goods) but I'm not totally convinced that this approach will work, especially at what I can only expect will be an expensive price point (I'm guessing $40). But hey, the rarest of all things occurred - Mez was actually at the booth! He's been so MIA the last couple years I thought he'd sold the business. 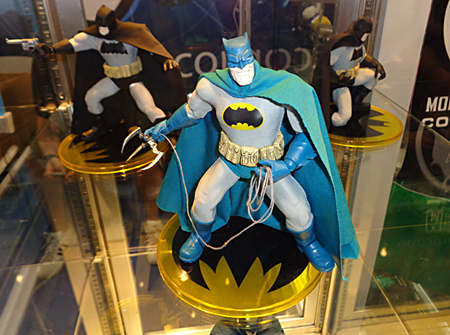 And once again NECA's booth stole the show, at least so far. New modern and classic Planet of the Apes and a huge and incredibly exciting push on retro Video Game figures! I must say I'm remarkably excited for the Robocop vs Terminator line. Plus a teased 1/4 scale DeVito Penguin!!!

Other highlights include the giant Smaug head at WETA's booth (which had a noted lack of Bridge Direct presence) and Funko's new, bigger booth complete with extra stall for cattle line (though the line was still capped relatively early in the night).

Diamond/Previews had Jean St. Jean's awesome new Crypto line, with reveal of the werewolf figure plus McFarlane's new building block line. The bricks look of the same low quality as all knock-off Lego brands, but the paint on them helps while the figures look pretty decent for the company & scale. All in all this is right up with the One:12 stuff from Mezco as being a refreshing, intriguing new angle to shake things up a bit. I'm curious to see how they do and what else they have in the pipeline.

After that, the shopping began! I got a reasonable haul for night one. Overall the shopping doesn't seem to exciting this year and prices are average, but we shall see how things unfold. All in all in was a good night, until the end when, in an extreme bit of irony, a pretty long train came through downtown at exactly the same time as Preview Night ended, holding the dump of attendees up for a solid 5+ minutes. Too cute! Dropped the purchases off at the car, grabbed some pizza at the creepily dead/dark Horton Plaza and then went to my annoyingly far hotel so I could get ready to do it all again tomorrow. 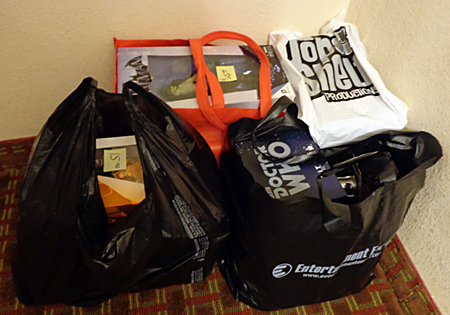