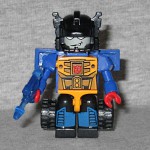 This new series was released to coincide with Age of Extinction, but the included characters are still mostly G1-inspired. The instruction booklet identifies this as Nightbeat, a little-known (but fan-favorite) Headmaster who was also a hard boiled private investigator. What? It's no weirder than any other G1 personality, is it? Seriously, he'd sometimes wear a trenchcoat and fedora. Despite being a giant, blue and yellow killbot.

But this toy isn't Nightbeat. Yes, he's blue and yellow, and yes, the instructions identify him as Nightbeat, but he's not. If you look at the tampograph on his chest, the patterns just don't match up at all. But they do perfectly match up with a different character: Punch. Yes, the Autobot counterpart of Counterpunch. The fact that the Kreon has bright red hands just cinches it. Sadly, he does not have a second tampo on the back of his torso, nor a second face - those would have been epic! If you want to duplicate his shifting allegiances, you'll have to design something yourself.

What you can do, though, is change him into a car. It's not a complex build:

you just lay the robot down with wheels in his hands. Okay, you have to remove the head and replace it with a block that allows you to create the hood and front grill, and you also move the back-plate to his waist and assemble the windshield and roof on it. As far as Kreons go, that's pretty darn intricate! The only things that don't get used in this mode are the head, helmet, and translucent blue gun.

"Nightbeat" is a decent Kreon, but if they'd admitted who he really is and gave us the parts to take advantage of it, he'd be even better.

(Or if, in a future series, they give us a character who turns into the same kind of car, but has a Counterpunch-style chest design.)