After releasing 50 "weekly" reviews in the span of just three months, we're going to slow back down for a while, reviewing just one pack a week. Unless, of course, you folks liked reading the Mega Mini-Reviews, in which case, just let us know and we'll ramp up again.

Leading his family and other survivors through the zombie wasteland, 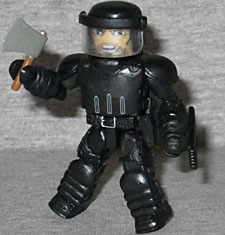 former deputy Rick Grimes was overjoyed to find a prison. Although partially infested with zombies, its large, fenced-in spaces made it an appealing new home.

Ah, with Series 3 we move fully into the "prison" era of the book, and nothing makes that clearer than putting Rick Grimes into his riot gear. Reasoning that the armor that protected prison guards from punches and stabs would work just as well against zombie bites ("zom-bites"), the survivors geared up to clean house. The gloves, thigh pads and boots are all the same that the MAX Law Enforcement set gave us, but the chest cap and the helmet (with flip-up visor) are new. He includes a black gun that fits in his holster, and an axe and nightstick that he holds tightly.

The set includes hair, if you want to remove the helmet, and beneath the chest pad he's been painted with the details of a button-up shirt. It's not really meant to be seen, though, because even the skin peeking out at the neck is solid black. At that point, why spend the money on the shirt tampo at all? We're not complaining, it's just odd.

Survival tip: whatever caused the zombie outbreak is present in the air, 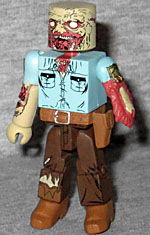 and not transmitted by bite. So if someone dies by causes other than zombie, their corpse will still rise to attack the living. Always destroy the brain.

The Guard Zombie was called "deputy zombie" during production, which probably explains why he's wearing cowboy boots. He's based on a walker that appeared in issue #13, but was only seen from the chest up - that leaves a lot of room for interpretation! He gets the same missing arm as Sailor Zombie, and they've interpreted his right arm to be complete, but severely wounded on the elbow. His pantleg is torn, but it's his face that's the most messed up, as it should be. He has the same holster as Rick, just in brown instead of black, but there's no gun to go in it. The set includes a replacement left arm if you want him to be full.