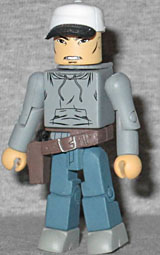 After falling in love with Hershel's daughter Maggie, Glenn decided to stay at the Greene farm when Rick's group moved on. He later rejoined them when they discovered the prison, and helped locate the prison barber shop.

That bio is here solely to explain why this figure is bald. He's wearing his baseball cap (still no Yankees logo), but beneath it is a shaved head. He's wearing a grey hoodie (complete with Amy's hood) and has a large holster on his waist, with a black pistol to go with it. He's got a surprisingly grim look on his face. Maybe he's mad about his hat. 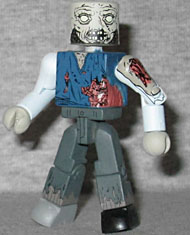 Survival Tip: take pride in your appearance. If you get bitten by a zombie, what you are wearing at that moment is what you will wear for the foreseeable future, so try to dress your best. Maybe raid the occasional thrift store.

He wears your granddad's clothes. He looks incredible. He's in a sweatervest; hunts survivors, eats their flesh. Vest Zombie is another "one-panel wonder," appearing in issue #34, lurking around the prison guard tower. The torso is the version molded with damage to the waist and right shoulder, while the wound on his left arm is simply paint. Despite the text about always looking your best, he's wearing mismatched shoes: one black, one gray.