Last year during Horror Month, all our Minimate Mini-Reviews were of TRU-exclusive Walking Dead Minimates. That was pretty well-received, so we're doing the same thing again this year!

After the assault by Michonne, the Governor's organized 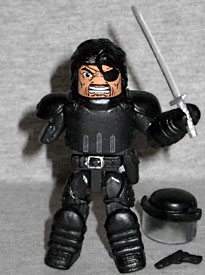 an army while he healed, complete with a tank. When he led the attack on the prison, he wore the riot gear worn by his former prisoners.

And this Minimate wears the riot gear worn by former figures, right down to the same chest tampo Riot Gear Rick had! We told you before that the injuries the Governor sustained in the comics were much more severe than the ones on the tv show, so in addition to his painted eyepatch, he's also got the same arm as Dr. Kurt Connors. If you want to remove his greasy hair, he does include the riot helmet, and it has a flip-up visor so you can still see his furious face. He's armed with Michonne's sword and a small black pistol, though of course he can only hold one of them at a time.

Survival tip: there is no evidence that a biker zombie is any tougher than 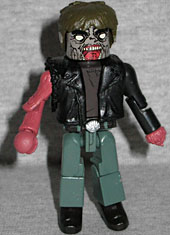 a regular zombie. But if you see a zombie in a leather jacket coming your way, run. Just in case.

All the Walking Dead Minimates zombies are based on ones that appeared in the comics, but this one really stretches the definition. He's allegedly based on the cover of Omnibus vol. 3, but as you can see if you follow the link, that's nothing but a headshot. Everything else? Art Asylum made it up. He's wearing a leather jacket with one arm torn off (though surprisingly, not the same one Lobo wore) and has the same gross arm as the One-Eyed Zombie. His left hand isn't a hand, just a mangled lump. He's also got a belt with a seashell buckle(?) and cowboy boots. This is all a massive departure from the comic art, but it's still a cool design.