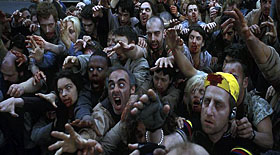 According to an article in the LA Times, Black Friday is for poor people.

Consider these opposite scenarios: In 2013, Bloomingdale's went against the grain by offering fewer Black Friday bargains than the year before, according to the advertising experts at bestblackfriday.com. At a Wal-Mart in Duarte, customers elbowed one another to get their hands on Crayola crayon sets, marked down to $11 from nearly $20. (A trending Twitter hashtag last Thanksgiving was #WalmartFights.)

"You have people who really need a bargain - they will sit out for two days to get that deal because that may be the only big thing they can afford for the whole family," said Britt Beemer, founder of America's Research Group. "Luxury retailers don't do very well on Black Friday because their customers are not going to fight the crowds."

It goes on to point out that, thanks to the big improvements the economy has made in the past year (thanks, Obama!), the super-rich bastards who had been slumming it next to us at Walmart and Target when things were bad have retreated back to their high-end enclaves, like Nordstrom. That's why stores are opening so early: they hope if you go there first, you won't have money to go anywhere else.

There really aren't any good sales this year. So go back to bed, Mr. and Mrs. America - you'll appreciate the sleep more than the junk you buy.