Now then, where were we?

Kathryn Janeway took command of the U.S.S. Voyager in 2371, 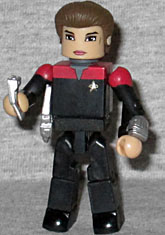 and her first mission sent her to the far side of the galaxy. It took several years for the ship to make its way home from the Borg-infested Delta Quadrant.

Oh, they got home? Good to know. I didn't really make it past Season 1. Janeway is looking stylish in her Starfleet uniform, which - thanks to its lack of any superfluous "feminine" paint details - could easily be swapped to any of the other TNG-era Minimate captains. She has her hair pulled up into a bun, a tall grey collar around her neck, and a waist cap that has a peg on the side where her phaser can be plugged in. She's also armed with a tricorder, and is wearing her wrist lojackimator! I don't know what it is. Not even Rustin knows what it is.

Annika Hansen was assimilated by the Borg at the age of six, and designated 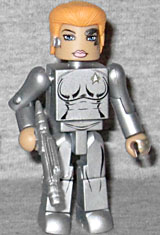 Seven of Nine. She was assigned to the U.S.S. Voyager nearly 20 years later, when the Borg required assistance to defeat Species 8472.

I'm aware, dimly, that 7 of 9 is some kind of 90s-nerd sex symbol (she was part of The Collector's collection), but I was already out of the show before she showed up, so to me, she's just a woman in a weird silver catsuit. Her Borginess appears to be limited to a bit of tech on her right ear and around her left eye. [You missed her left hand --ed.] Judging by pictures, she should have more visible forehead - her hair should go up more. They did a nice job making her suit look tight and clingy, though. She's armed with a large silver phaser-rifle.

Most of these TRU-exclusive Star Trek "Legacy" Minimates sets pair a captain with an enemy, but not this one. That may be because the only memorable enemies the show had were weird, inhuman bug-things that wouldn't lend themselves easily to the Minimate form. Or because they knew nerds love 7 of 9.