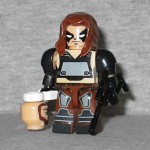 finally turned up in one of those gravity-feed displays that hang near the end of the building toy aisle. Of course, since Hasbro gave up on printing codes on the bags, I only bothered getting one figure from the series.

(Come on, as though there was any doubt that figure was Zartan. I've gotten every Kre-O Dreadnok they've made so far, and have been waiting for Zartan since the line started. Zartan's probably my favorite Joe character, so I would have been piiiiissed if Series 4 hadn't come out.)

Kreon Zartan does a very nice job of re-creating the full-sized figure's outfit. There have been other Kreons wearing hoods, but none of them were open in the front like this. His eyes are painted a bit too low on the head, honestly. He's got too much forehead. The chest armor is very nice; even if it doesn't change color, they painted the center a lighter shade so it stands out (ditto the pads painted on his thighs). He wears armor on his shoulders - separate pieces, not just paint - but it comes down so low on the arm that you can barely see any skin between it and his gloves. 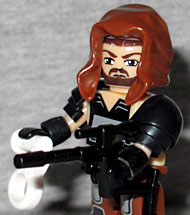 Zartan gets a gun, but it's not really anything special. It's the same mold used to represent Megatron in the Transformers Kre-O line, so pretend this is another crossover between the two properties if you like. His true accessory is a second head (which is also what makes him [relatively] easy to identify by squeezing the bag), representing the "beard guy" mask. He doesn't have a backpack to keep it in, but the set does include a little loop that plugs onto the top of the head so he can carry it. And naturally, any other Kreon head will fit his neck, as well.

By taking the codes off their Kreon blind-bags, Hasbro is doing nothing but costing themselves money. There are several figures in Series 4 (and Series 5) I'd love to get, but I'm not going to bother trying to get them if they're too hard. Ultimately, though, I'm just glad Zartan was available this way, rather than having to buy some big vehicle set to get him - although, if you did, he might have his Chameleon swamp skier to ride.