This is the latest in a series (of indefinite length and regularity) of blog posts memorializing cancelled toys. Our figures today are Mattel's MotU Minis. 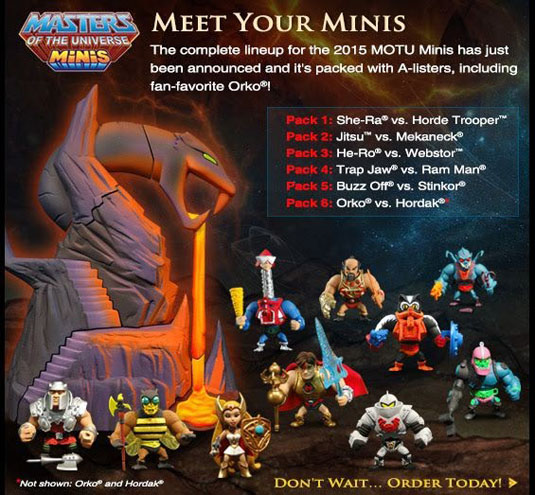 The Minis were being sold via one of Matty Collector's subscription plans, but they fell short of their goal.

"MOTU Minis Update: These little guys had a big task and we're sorry to say we didn’t reach our goal for the 2015 MOTU Minis subscription. We'd like to say a HUGE thank you to all the fans for waging such a good, strong fight. For those of you who did subscribe, refunds will be issued in the next 7-10 business days.

Though we didn't win the war, the battle for Eternia will continue with our awesome 2015 Classics lineup. The team is also hard at work behind the scenes to bring you exciting new MOTU products, so stay tuned for more info to come!"

It's almost like $20 for a two-pack of minifigures isn't something a lot of fans want to get behind. Even including Snake Mountain as a "build-a-backdrop" wasn't enough to entice, so don't be surprised to see Series 1 remnants hitting clearance sometime in the future.

This entry was posted in cancelled toys, Mattel, news and tagged MotU, She-Ra. Bookmark the permalink.