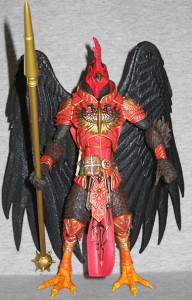 When the Four Horsemen launched their Kickstarter, they had six birds ready to go - the rest were left to be stretch goals. The fifth unlocked was the big black cock, Cockitrus. Did they really have to name the rooster something that sounded so much like "cockatrice"? His armor is red and gold, and his feathers are black (or, on the forearms and legs, dark brown). If you're going to buy the add-on wings, he's the only bird other than Decimus himself to use the black set. His feet are orange with yellow talons. The variant birds don't get the same ornate weapon as Decimus - just a staff 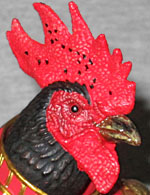 with the spiked mace head on one end, and a sharp spike on the other.

Cockitrus's head is wonderfully done. He's got the black feathers, like we said, but then he's got a fleshy comb and wattles, and both those and the horrible wrinkled skin around his eyes is covered with countless tiny bumps, just like on the real bird. His beak is short and glossy, and his eyes are the same red as the bare flesh around them.