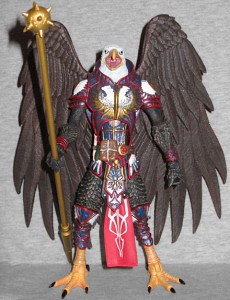 When the Four Horsemen launched their Kickstarter, they had six birds ready to go - the rest were left to be stretch goals. The sixth unlocked was the screaming eagle, eventually to be known as Eagalus, the American Eagle Warrior. You know, like Freedom the American Eagle, except not a terrible idea. It's nice that his name sounds so much like "egalitarian," too.

Eagalus' feathers are dark brown, and his armor is, naturally, red, white and blue (and also silver and gold). His head is white, which is why the gryphon looked so much like him. His yellow beak is open (he is a "screaming" eagle, after all), and the inside of his mouth is pink. All three sets of his feet are yellow with black nails.

If you're going to buy the add-on wings for him, the dark brown 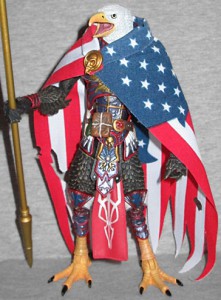 set will match his body. But you're not going to buy him any add-on wings (and not only because the faux armor-wings on his back are kind of glued in place by their paint): Eagalus comes with an American flag cape to drape around his shoulders, and he couldn't wear that if he had big wings.

Like the Motorized Patriot, the flag has been distressed to show age and wear. The lower edge is tattered, from dragging on the ground, and there are holes torn through it. The cape has a raven skull clasp, matching the one on the belt, and rather than being a plain rectangle, the canton is shaped like an eagle's head - nice touch! The variant birds don't get the same ornate weapon as Decimus - just a staff with the spiked mace head on one end, and a sharp spike on the other. 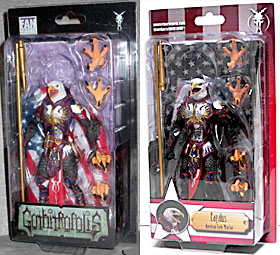 If you got Eagalus through the Kickstarter, then his packaging looks like everyone else's: black and purple, Gothitropolis logo, all that. If you order him through Store Horsemen, however, you have the option of ordering him in "patriotic packaging" - big ol' American flag background. The toy inside is the same, so get whichever one you like best.