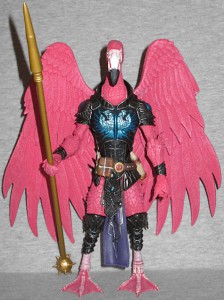 Flamingus was one of the mystery reveals that the Four Horsemen didn't unveil until relatively late in the Kickstarter campaign, and he's definitely one of the most off-the-wall variations of the Ravens. Other than the rooster, they're all pretty fearsome (eagle, owl, falcon), sinister (vulture, raven) or mystical (griffon, phoenix, Quetzalcoatl). Flamingus is just... a flamingo. Not exactly known for their imposing nature.

Back in the Vultus review, I mentioned I was pretty sure of his species (Lappet-faced Vulture), but my knowledge of flamingos is less comprehensive. To the Internet! There are six species of extant (still-living) flamingo, and I'd guess after doing a bit of comparison that Flamey here is an American Flamingo. While the name might infer that he hangs around with Eagalus, but don't forget there's a Central and South America in addition to the North. The American Flamingo (Phoenicopterus ruber) is occasionally spotted in Florida in the Everglades National Park, though it's believed these birds are vagrants who strayed too far from Cuba.

OAFEnet Fun Fact: flamingos are pink because their diet is high in organisms that contain a pigment carotenoids. Algae and shrimp compose the majority of their food source, and the carotenoids contained therein are the same pigments that cause shrimp to turn pink when cooked. Take the carotenoids out of their diet, and flamingoes turn white. Bonus fun fact: while they've traditionally been included in the same order of birds that included storks, herons and other long-legged water birds, recent genetic evidence suggests they're more closely related to grebes, an order of duck-like waterfowl. 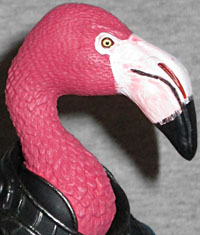 Flamingus shares his sculpt with all the rest of the Raven figures, save for his head... and in the case of my figure, his right elbow. It's pretty clearly a left elbow; you can tell by the way the feathers are pointing. It doesn't affect his articulation in any significant way, but the sculpt isn't as fluid as it should be. His head is properly phoenicopterine (flamingo-esque), with a longer than normal neck and a massive downward-curving bill. The detail is quite impressive, or would be if we weren't so used to this kind of excellence from the 4H. 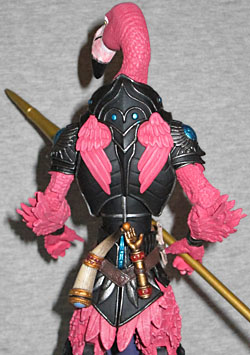 His (or hers? Nothing really indicates Flamingus's gender) feathers are a deep rich pink, and his armor is black with dark metallic trim, and two tones of blue to add a splash of color on the breastplate and other areas. The paint is neatly applied on the armor, which I can't say holds true for all of the others I purchased. His loincloth is purple, and the vestigial wings that poke out from his back are pink like his feathers, implying that these are actual winglets, not sculpted wing-like armor pieces. Pink full-sized wings were available as an add-on purchase (as seen in the photo at the top of this review).

If the color scheme seems familiar, that's intentional. When this guy was first revealed, it was clear the Horsemen intended for him to be a companion piece to another wildcard variant from their previous FANtastic Exclusive offering: The Chalice of Guudenuph, also known as the Pink Elephant. Despite the fact 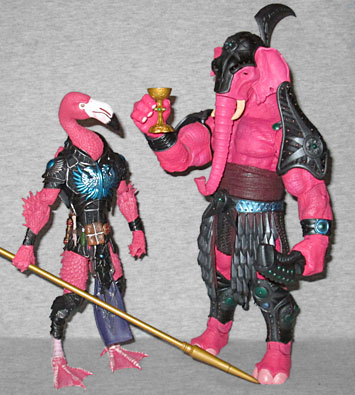 that Flamingus is from the world of Gothitropolis and the Chalice hails from The Seventh Kingdom, it's clear that these two are meant to be paired with each other. It's not just the pink, the armor colors match as well. That bit of synergy led me to track down a Chalice of my own, and I'm glad I did; they look great next to each other. And, of course, together... THEY FIGHT CRIME!

But we're not quite done discussing the paint yet... there's still the matter of the head. Most of it is rich pink feathers, until you get to the face and bill which are done in mostly white with a watered down pink wash over top. It's not expertly applied, but I don't mind it. There are also yellow eyes with black pupils, ringed with dark brown. These look fine too. Where it starts to fall apart is where black was added to the tip of the bill, as well as the separation between upper and lower jaw. In the latter area, it ends quite abruptly well before the mouth actually stops being sculpted. It's pretty jarring. The prototype featured this somewhat, but the line was much thinner and less obvious.

On the beak tip, meanwhile, the black paint on mine bubbled up before drying, leaving some ugly bumps on his beak. I can't say how widespread the issue is, but at some point I considered getting another Flamingus from eBay due to the elbow issue, and the only other example I saw featured similar bumps on the beak. They're small, and whether or not they bother you may be entirely dependent on how OCD you are about your toys, but it's still kind of annoying to find issues like this on a specialty figure you're buying sight unseen.

Flamingus gets the same gold spear that the non-Raven variants 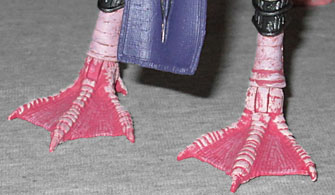 get, and the same interchangeable sets of grasping talons. Additionally, since this is a wading bird and all, he gets the same extra pair of webbed feet that came with Minotaur the Duck, except painted pink to match the rest of his scaly legs. The addition of these webbed feet were a really awesome bonus from the 4H, and it shows how much they listened to the fans when it came to designing the best possible figures they could.

I only wish the end result lived up to that exquisite design work. Like Vultus, I still very much enjoy my Flamingus, but he has a few troubling issues he shouldn't. The two left elbows is somewhat forgivable, since it's a small piece and doesn't really affect the figure too much, and as far as I know it's an issue that affects mine and mine alone. The beak problems are a bit less forgivable, since the face is much more prominent than the elbow, and it's an issue that I know isn't 100% unique to my figure. I've contemplated sanding the offending bumps down with a very fine grain sandpaper and touching up the result with some flat black, but I'm wary of screwing up and finding a replacement Flamingus is well out of my price range, or worse: simply unavailable.

All that said, any flaws I've encountered in this line haven't dampened my excitement one bit, and as the 4H continue to tease the idea of continuing this line, I find myself just as excited as I was when they reached each stretch goal for the initial Kickstarter. Bring on the macaw! The toucan! The spoonbill! And... more than any of those... GIVE ME A DODO!