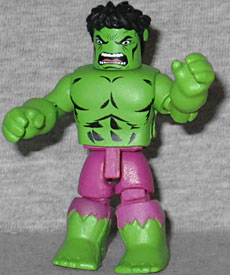 huge amounts of gamma radiation during a military weapons test. Now, when his anger or negative emotions reach a boiling point, he transforms into the green-skinned Hulk!

There have been no shortage of Hulk Minimates over the years. Even if you discount alternate realities, movie toys, and Red Hulks, there are still at least 20 of him, so by now Art Asylum have the process down to a science: messy hair, angry face, powerhouse chest, bicep- and thigh-caps to make the limbs bigger, oversized hands and feet, and a waist cap so it does get overwhelmed by all the other parts. And if that's all this Hulk had going for him, I wouldn't have bought it. 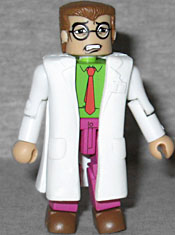 The set includes a second set of arms, feet, and an alternate head. If you strip all the extra pieces off the Hulk Minimate, you can replace them with these secondary bits (as well as the included labcoat), thus turning the Hulk into puny Bruce Banner!

This is the first time there's been a Bruce Banner Minimate since Series 1 in 2003. Needless to say, we've come a long way since then. The face has a lot more detail, even if it's done in a very cartoony manner - he's biting his lip and arching his eyebrows nervously. To match the Hulk's colors, his pants are purple and his shirt is green, but his white coat keeps it from being too obvious. 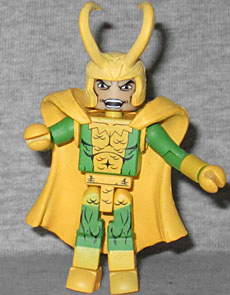 The Lord of Lies, Loki is the adopted brother of the Norse god Thor and the adopted son of the All Father Odin. His Frost Giant blood sets him apart from his family, and he frequently engages in trickery to achieve his selfish goals.

This feels like an update of the first Loki Minimate: he's got the yellow scale mail, the green tights, the humongous cape, and of course the horned helmet. Gotta have a horned helmet (even if you can take it off and replace it with Bishop's hair). Actually, since the hair hangs down so low in the back, you have to take his cape off, too, if you want it to fit properly. He's got a crazy smile on his face, and wild eyes.

There's really not much reason to pair Hulk and Loki - other than one smashing the holy hell out of the other in a super popular movie. But then, what do Punisher and Deadpool have to do with each other, [Ahem --ed.] or Daredevil and Venom? [Double ahem --ed.] What's really weird about these supposed "best of" series, though, is that the figures are almost all new. How can they be the best when they've never been released before? I wish this Hulk/Bruce Banner figure came with a better partner, but this is still a great set thanks to the surprise waiting inside.