Daniel Rand channels the power of the dragon Shou-Lao!

Iron Fist was originally meant to come out in Series 4, as the "swap figure" for Protector. As a reminder, here's the text from the back of that packaging:

The power of these heroes lies not just in their powerful fists, but in their mighty minds!

Granted, I would have bought Protector over Iron Fist anyway, but it was annoying that he never came out. A big round of applause to Hasbro for finally making it happen!

There's been an Iron Fist Marvel Legend before, but that one was wearing his old costume, because apparently the Iron Fist costume works like Phoenix: green when you're good, red when you're bad, and white when you're perfect.

(Actually, this costume first appeared in New Avengers: there was a whole mystical kerfuffle, and Danny was pulled into the Light Dimension; when he came back, he had a new, white costume as a visual clue to the experience he had there. Very simple.)

Like the figure he was supposed to be paired with, Iron Fist uses Hasbro's version of the Bullseye body, but the fact that he shares Ms. Marvel's sash hides the bad waist design. There's some subtle blue shading on the body, light enough that it still looks good, and his boots, forearms wraps, mask, and the dragon on his shirt are all gold. There are black shapes around his silver eyes. 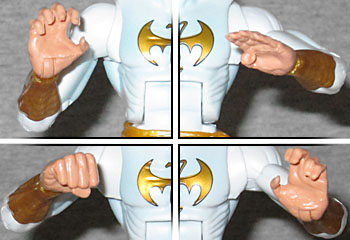 Iron Fist doesn't have any accessories, but you do get four pairs of hands for him: clawing, chopping, punching, and some kind of martial arts strike. The hands are nicely designed, and swap out easily. Without the extra hands, this would have been a super boring release; with them, he's cooler than you'd expect.

The Build-A-Figure piece included with Iron Fist is the Allfather's left leg, the twin to the piece that came with Thor. At first glance, I thought the legs were reused from Ares, because of the armor, but nope! All new.

It may startle you to learn this, but we aren't typing these reviews live as you read them - they're written ahead of time. So you're reading this after Toy Fair, but it's being written before. That said, I would bet good money that one of the things revealed this past weekend is that Hasbro is taking all those missing "swap figures" and slotting them into upcoming series of Marvel Legends. We may someday see Future Foundation Dr. Doom and Phoenix Five Cyclops after all!