Pietro Maximoff possesses the ability to move at extremely 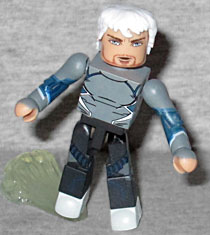 high speeds. The source of his powers, as well as his connection to Hydra and Ultron, is unknown at this time.

Quicksilver was great in Days of Future Past, but he was also basically a gimmick: Avengers: Back 2 tha Hood looks to be using him as an actual character. Both siblings' costumes are less advanced than the other Avengers, because they're just scrounging whatever clothes they can find: so he's not wearing a costume, he's wearing what amounts to Under Armour. To keep him looking right, his shirt is two-tone blue with jagged white bits that suggest lightning bolts. He has white hair, but dark beard stubble, and a "speed" base.

Wanda Maximoff is Pietro's sister, and can manipulate magical energies; 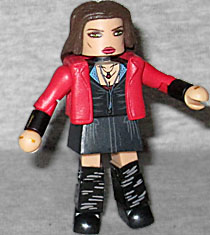 her abilities include telekinesis and hypnosis. The source of these powers is unknown at this time.

Scarlet Witch's outfit is just as piecemeal as her brother's, which kind of makes her look like the X-Men: Evolution version of the character - a little bit punk rock, a little bit grunge, and 100% proof that someone in the costume department came of age in the late '80s and early '90s. She's wearing a red jacket over a black dress, shredded black stockings, and black sleeve/cuff things with gold zippers. She has new hair (to hang over her new jacket), a tampograph to create her necklaces and the details of her top, and small gold details on her hands to suggest her rings. No energy effects, though.

There's a rumor going around that Marvel is trying to kill the X-Men franchise because they don't own the movie rights - you'd have to be outstandingly gullible to believe that, and yet, it persists. Part of that is the claim (which we won't be able to verify or debunk until May 1) that Quicksilver and Scarlet Witch are no longer mutants, but Inhumans. Another part of it is that Quicksilver and Scarlet Witch won't actually be called Quicksilver and Scarlet Witch, because those names were "taken." That bit, at least, is easy to disprove, since this official Avengers 2: The Squeakquel product has their names right there on it. Quickietro and the Scarlet Wanda are a TRU exclusive, so if you want to complete your Avengers lineup, that's where you'll need to look for them.