Gangsters Jules Winnfield and Vincent Vega are on their way to deliver a package to their boss when Vincent accidentally shoots a colleague. Covered in blood and with a body in the back seat, the pair hide out with Jules' old friend, Jimmie, while they wait on cleaner Winston Wolf, aka "The Wolf." But the clock is ticking, because Jimmie's wife Bonnie is on her way home, and the situation could get explosive. 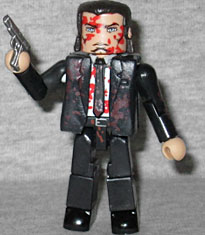 We're now three-for-three on Vincents in Minimate sets. Bloody Vincent is wearing the same suit and tie as the first release, just with a lot more red paint apps all over the place. On his face, on his jacket, on his shirt, on his tie, on his sleeves, on his pants... but not on his hair or hands, for whatever reason. He's armed, of course, with a silver pistol - perfect for shooting Marvin in the face. Why was he waving his gun around, anyway? Gun safety, kids; it matters. 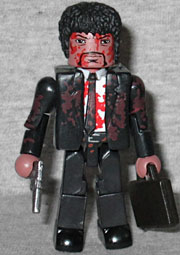 Bloody Jules is the same deal: the existing Minimate, just with more bloody paint apps all over the place. Impressively, the blood is painted differently on both these figures - it's not just a generic tampo applied to both of them - but if you compare the shapes of the stains on the toys, they don't match the ones seen in the film. It's hard to judge on the black coat, legs, and arms, but on the white shirt, it's quite apparent. There was some good continuity editing on these scenes, so the blood was the same throughout; the toy may not line up perfectly, but it still looks good. Also, he has a gun and briefcase. 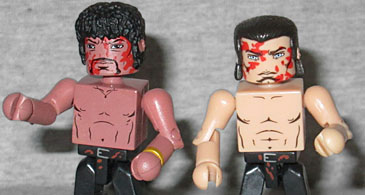 So that the boys can clean that blood off, the set includes a second chest and bare arms for both of them - they're bare and bloodless, and Jules' left arm has a gold paint app at the wrist, to represent the large bracelet he wore, but Vincent doesn't get his watch? Unusual choice. Oh, and just like we saw with the Thundercats sets, this one includes an extra pair of brown hands to make up for the ones missing from the two-pack. 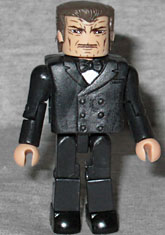 Next we have yet another plain guy dressed in black and white - this set is really bringing the variety, isn't it? Granted, this is a tuxedo, not just a stylish suit, because The Wolf had spent all night at an underground casino before being called in to clean up. The tuxedo jacket is one we've seen before, but it's not one that's been in heavy use, so it still feels unique. The Harvey Keitel likeness is pretty good, so if not for his little mustache, we'd be one head swap away from a Minimate Mr. White.

And then we have Jimmie, of Jimmie's Dead Nigger Storage. 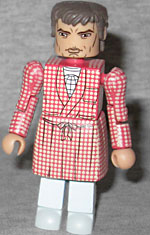 Yes, "Jimmie," not "Jimmy." Why is his name spelt with an "ie" instead of the more common "Y"? No idea, but the role was almost played by Steve Buscemi, which would have given us a second Reservoir Dog in-the-making (something that's doubly funny, since the character of Bonnie was originally going to show up in that movie). Jimmie was Jules' previous partner (perhaps a reference to Truffat's Jules et Jim), but he left the gangster life. He's wearing a checkered robe painted with very intricate apps applied all the way around, and a T-shirt with a globe logo peeking out (representing Orby, the mascot of Detroit's Orbit Magazine). If I didn't know who this was supposed be, however, I never would have guessed it from the likeness.

In addition to everything listed already, the set includes 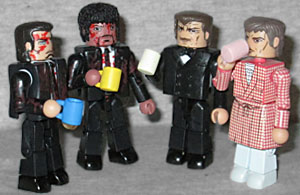 four coffee cups, since coffee (and the drinking thereof) was a recurring element of "The Bonnie Situation" segment of the film. Showing the kind of attention to detail that we here at OAFE absolutely love, each of the cups is a different color, matching the ones they drank from in the film: blue for Vincent, yellow for Jules, ecru for Winston Wolf, and pink for Jimmie. Now, in the scene, both Winston and Jimmie's cups had the same color body, but different stripes over that; the stripes made them look different colors from a distance, and that's what the toys are trying to represent. Well done, designers!