And we're off! After learning, again, that Southern Californian traffic can not be trusted I made it my business to hit the road early. While I did avoid traffic in San Diego, I still got stuck in some very annoying up near L.A. further proving there just is no escape from hassle. But, I made to the hotel and then downtown by 2pm affording me time to get lunch and catch a movie before the show opened up. after that, straight to the Convention Center went I to collect my badge and await entry to the hallowed halls of SDCC. 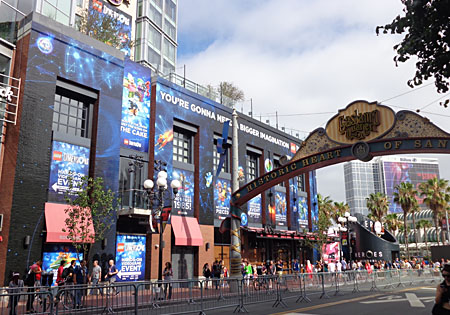 The milling crowd, awaiting the Exhibitor Hall doors to open

As is often the case, Preview Night is a blur to me now - a convulted race to see everything in a single pass, then a incongruous dash to buy all the exclusives, to middling success. The coolest reveals of the night, for me, was the return of NECA's Bat Gremlin and the 'Ultimate' Sarah Connor figures, and DST's new Ghostbusters (including Janine!). I also have to confess I was, and am, pretty impressed by McFarlane's Game of Thrones Building Sets, not only will I definitely be getting those it is weird to be excited for a McFarlane Toys product after a decade of them being low-tier in my collection.

And then, of course, there were a myriad of other booth novelties. Like Adult Swim's perennially esoteric booth, this year a scary/psychadelic cat with a prize-slide for a tongue which faced Weta's booth, cornered by replica's of the Dwarf Ironfoot on his battle-pig, one of countless eye-rolling bad gags from the awful Hobbit: Battle of the Five Armies. Legendary Picture's booth had a giant, full-size Troll from the new Warcraft army (and by looks of things, he's about to pummel poor Weta Co-Founder Richard Taylor in my photograph below) and Lego had a wild, half-scale Hulkbuster Ironman versus Hulk diorama too!

By the end of the show I was fully laden down with two massive bags of pure Haul, so after a quick drop-off at my car it was off to dinner (we went to the Mexican place that replaced my long-time Gaslamp fav Fred's and was sorely disappointed by the new places fare) with my hotel-mates before heading back for what would prove to be the longest sleep I'd get of the show - 7 hours. 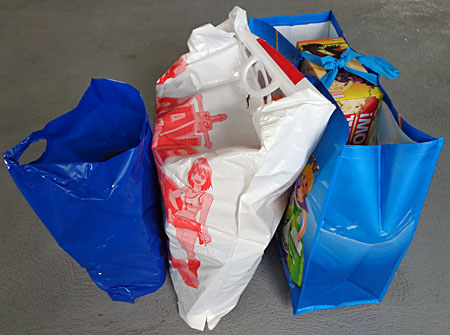