Woke up at 5:00am, gathered my gear, headed over to the Convention Center and ultimately got in line at 6:00am. This is the game we must now play in order to get toys. And what terrible fun it is.

So, after about an hour and a half the line for the Sails Pavillion started moving and they let us up in to scatter for the multitude of various sub-lines. I was able to walk right through the Hasbro line affording me a chance to snag a ticket for the HasbroToyShop booth (my entire reason for going through this early morning) and then fail at getting a LEGO ticket (a cold and heartless friend in these trying Comic Con times). The LEGO line wrapped out and down the stairs in the back to the point where I was parallel with the adjoining Marriott hotel when I got in line. Fortunately though it moved at a reasonable pace up to the iPads which you simply tapped to receive either an Angry Cop for miserable failure or a a Good Cop for joyous success. After my fail, I opted to get in line for the exhibit hall rather than try LEGO again, and thus the adventure continues.

My ticket for Hasbro (get in line at 6am, enter the booth at 4pm). The lines for Fox Studios, Lego and Bandai stretching away from the Convention Center.

Where the Lego line ended when I got it - the windowed building in front of me is part of the Marriott hotel.

The line to enter the Exhibit Hall, an hour before doors open.

Once inside I just did some mindless milling and shopping before the panels started. Comic-Con stuck it very hard to toy fans this year by scheduling Mattel's Mattypalooza panel and Hasbro's Star Wars panel at the same time - High Noon, Friday. There was a lot of debate between my friends, but ultimately I choose Matty. While I am only increasingly more excited for the new, Kathleen Kennedy-led era of Star Wars I knew it was a pretty safe bet that Hasbro couldn't say or show much regarding their Force Awakens product. Meanwhile, over at Mattel this would be out first year without the controversial Scott Neitlich on hand, plus with everyone seemingly burnt out on MotUC and MotU out the nose it was really tough to predict what the panel could possibly portend! So, yeah - Mattypalooza. And you can click right here for my coverage of it!

After that wild time, I went down to the Hasbro booth to see what they'd put out as a way to vicariously see the panel after the fact. And, holy sh*t.... a 6" scale Force Awakens TIE Fighter!? My immediate reaction was "you gotta be kidding me," but I'd be lying if I said I haven't fallen under its spell, and will be re-visiting it through out the weekend. Hasbro even put together a massive diorama (recreating that snippet in the 2nd teaser) with a bunch of TIEs and Stormtroopers. They also had out new 6" figures of Jango, Farmboy Luke, Ahsoka and Kanan from Rebels. Not bad, but figure-wise, not very exciting.

From there it was over to the Mattel booth to see the new MotUC stuff, but they were, predictably, swamped and still putting it up anyway. The sheets were pulled on the spec Mega Bloks Grayskull and the MotUC Snake Mountain playsets, though. The Grayskull was certainly neat, but made out of so many pieces I can't imagine it'd be very cost effective if released as is (and besides, I'd far rather see Imaginext tackle MotU, like Shocka suggested). Likewise, Snake Mountain is impossibly big, which is basically what everyone I talked to said - it's cool but it's just too impractically large. A damn impressive prototype in person though. Speaking of which... man the Thundercats figures are gorgeous!

Next up was Playmates' TMNT panel, but it was so mind-numbing I had to get out of the Con entirely. So - I took the opportunity to go explore the ancillary offerings nearby. Over in the Petco Park parking lot was a big "Conival" which was far less impressive than last year's but still had some neat stuff. There was a big drop ride thing for the new show "Scream Queens" that apparently riders had to fill out legal forms to ride. Next to that was a novel little summer camp set up for "Boyscouts vs Zombies," whatever that is. There was a whole corner with 5 or so food trucks, and some tables with umbrellas but not enough shade to really be enticing. The big draw of the area was a GIANT inflatable Snoopy Dog House, hyping the new CG Peanuts movie. From what I could see the cavernous interior was mostly dead space though, however there was a small second floor providing access to a slide - which was cute. Whatever "Dark Souls III" is, though, absolutely stole the show for me. They had a large 'booth' with a beautiful, fully sculpted backdrop and a big creepy Knight knelt over a dead body as a photo op. There was a sword in front and when folks gave it a tug and bunch of black-ish blood would spray up from the corpse! It was grim. It was awesome.

Next, I crossed over the railway bridge, affording a lovely view of the Convention Center, to checkout the grassy area to the south of the Hall. The FX channel had taken over the whole area with a bunch of... stuff for its various shows. Everything had a sizable queue and I don't watch any of the shows so I didn't check them out but they certainly looked neat. There was a probably-haunted-maze for The Strain, a snow-globe for Fargo, a really, really cool hotel facade for American Horror Story and some kinda of probably-haunted-maze for something called The Bastard Executioner. That "building" was pretty sizable so I followed it around and discovered two big surprises - the already long line of Hall H campers and a whole Adult Swim mini-carnival! They even had a life-size statue of Rick & Morty, along with Rick's wrecked spaceship! Again, it was hot so I wasn't feeling the line, but it was still cool to ogle all the stuff from outside, even though Hall H-ers were building a shanty town along its walls.

I headed back inside to cool down a bit and further peruse the various toy booths. I walked past Mattel's booth and noticed there was no line, so I walked right up and my figures with zero hassle! I had roughly talked myself into getting the Batman v Superman two-pack but it was sold-out, so that was annoying but not a dealbreaker. I got into the Hasbro line but the Episode VII Stormtrooper was sold out for the day, surprisingly though they told me to bring my ticket back tomorrow and I could get one then - nice! (Spoiler alert: the Saturday morning line was capped and troopers were sold out within an hour of opening...)

At 7pm Action Figure Insider Presents: Women in Toys was Moderated by some dude and featuring Allison Niehls (social marketing person for Kidrobot [and formerly Funko]), Ayleen Gaspar of October Toys, Kat Sapene (prototype painter for Sideshow Toys) and Irene Matar (freelance sculptor, most famous for doing DCD's new animated Batman figures!). It was a really cool mix of ladies and a nice spread of talents and jobs. I kind of expected it to be a little pandering, focusing mostly gender bias, but it was actually a really cool, fun panel about the different aspects of the toy industry. We had a marketer, a manager, a painter and a sculptor. Pickett asked if they'd encounter many issues based on gender in the industry and none really had. The only time it's really come up or gotten weird is with fan interaction on occasion. Kat, though, is the only full-time woman in the paint department (at least) so she's finding it difficult to pitch the rest of the team on lines she'd like to see them do since the guys are generally only interested in robots and monsters. All in all, it was a really cool panel and it's a bummer it was at the end of the Exhibition Hall hours and so late in the day because it really deserved a better audience turn out than it got.

A friend of mine managed to get in to Hall H for the day and just after the Star Wars panel he texted me about the free concert, so I dashed outside quickly before the AFI panel to see the crowd heading over to the venue, then after the panel I headed outside just to find a crowded outdoor theater blaring the familiar tunes of Journey. I checked in it with my friend and was surprised and happy to hear the concert hadn't started yet, so I headed down and over to secure a nice place to watch from afar as the sun set on another splendid day at Comic Con.

The Hall H audience is led over to the concert venue; My view of the concert; The San Diego Convention Center at dusk; Fireworks over Star Wars.

Friday's Haul (minus my Hasbro bag, which I forgot to photograph): 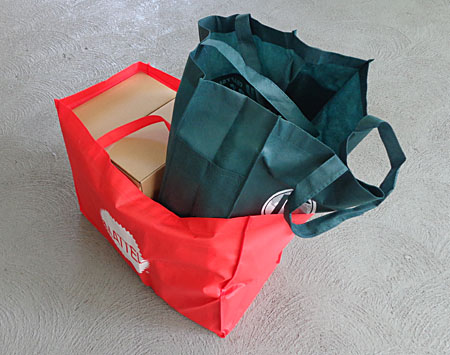