Woke up groggily after my late night and hastily packed up my belongings, checked out, and caught the shuttle bus back over to the convention center. It was my first time aboard the shuttle and, aside from being full since it was the start of the day, an all together pleasant experience. 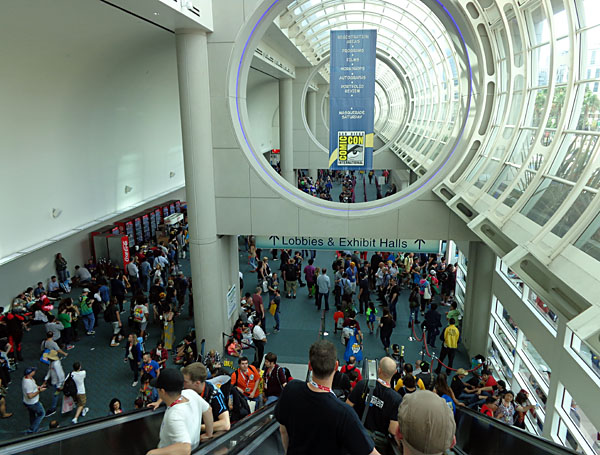 Upon arrival it was straight to Funko but again the line was capped, so I gave a pitiable pass by of Mattel and Hasbro to see if there Out of Stock items were suddenly, briefly In Stock - but of course they weren't. And thus began the Sunday tradition of aimless wandering, endless bouncing between vendors and exhibitors for the umpteenth time. Though I did see part of the Marvel Legends poll-ing at the Hasbro booth, along with the announcement of the finalist from Saturday, the depressingly predictable Symbiote Spider-man. They did, though, surprise everyone (at least me) with a new head for the boring as heck new classic Captain America - Capwolf!? That figure went from filler to fun real fast! And seriously, how gorgeous is that new Onslaught!? I predict the Magneto-headed version will be an exclusive next come this time year.

Shopping this year was, frankly, middling at best. It seems that the toy booths all had effectively the same selection of stuff and all for the same prices. I did manage to find some good stuff early in the show but over all it made for a bland shopping experience - do I really want to spend $40 on Jumpsuit Ripley? Which vendor seems the slightly coolest so that I'll want to buy 18" Superman from them rather than the other guy? I got a couple final figures but really it was just about killing time until the DST panel at 3pm.

After DST's panel I went straight down to Funko in hopes that they might open the booth up at the end of they day, and with my last bit of luck I managed to get in! I ended up getting more than I intended because I was just drunk off of getting in line though sadly, and predictably, some of my most wanted items were sold out (damn, I really wanted that bloody Jaws set!).

Finally, it was down to the mad dash of the last 30 minutes where traditionally you'd find good deals as the "just don't want to pack it up again" mentality set in but it seems that trend is in deep egress, no doubt a result of how expensive it is even for vendors to attend the show. Then, at 5:00pm, the announcement came that Comic Con 2015 was over and promptly half the lights in the Exhibition Hall turned off in an attempt to induce people to exit. The walk out was slightly surreal and many of the exhibitor's booths were now roped up and in various states of deconstruction as the exhausted employees, no doubt, were eager to get home and get some rest.

With final purchases in hand it was off for dinner with a dear friend before heading back to the hotel, loading the car and driving off in to another California sunset, the debris of another Comic Con behind me.