DC Direct had the unenviable task of being the first toy manufacturer panel of the Con, hosting their presentation just one paltry hour after the Exhibitor Hall doors opened and when most folks are still seeing the sights and attempting to queue for exclusives. Regardless, the DCC crew still managed to pull in a good crowd.

Kevin Kiniry moderated the panel and ran things a little differently by breaking up the PowerPoint presentation with a couple games based on classic TV game shows. These were a novel mix of fun twist on the format and annoying gimmick, but all resulted in the audience contestant getting a free collectible for playing. Each moderator set up a black board in front of them with a character logo on it and a special prize behind it. The participant then had to guess which panelist said what thing, and then would get the giveaway behind that person's board or they could answer a second trivia question and pick a mystery prize from behind any of the boards instead. It was kind of fun, a decent filler since they didn't have much in terms of new or product reveals.

Bombshells
Liked the Cheetah & Killer Frost comic cover designs so much they moved their statues up in the release schedule
Upcoming digital first series, each character will have a different tone to her issue but all in this alternate '40s history

Designer series
Darwin Cooke
Saw his variant covers and immediately fell in love with the designs
Lee Bermejo
"Jim Lee always says none of my characters iron their costumes" he found it tough to design GL. Dini requests a Bermejo Joker, if the toys do well they are ready to do more. Teased a Bermejo non-batman B&W statue
Capullo
continues with WW and Joker 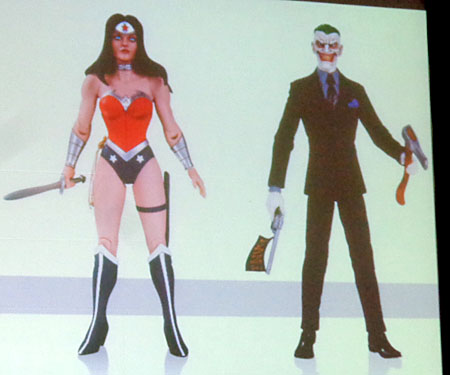 Q&A
No more Scribblenauts
Going to do stuff for Suicide Squad movie
Long list of prop stuff they want to do (like Hawkman's helmet) but not sure about producibility
No Batman '66 toyline - all Mattel
No plans for Dick Grayson figure
Unmasked Arkham Knight? Maybe in the future
Might revisit Injustice in the future
Might expand the wood figure line with at least one character
Would likely introduce new characters in the Icons line