Told ya Iron Man wasn't the only black repaint we'd be getting. 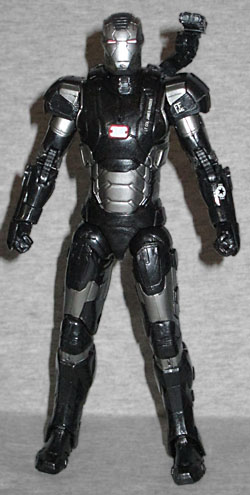 a torrent of explosive devastation as War Machine!

This figure is the same mold as the Iron Man 3 Iron Patriot, just done in War Machine's traditional colors. This is actually a release that many people were expecting to see two years ago: as Monkey Boy said in that review, the packaging seemed to be suggesting that this was a planned variant, possibly to be released alongside the also-revealed Mandarin and Rescue figures. But none of those ever appeared, and if War Machine hadn't briefly cameoed in Avengers 2: Electric Bugaboo, we probably wouldn't have this one now.

An existing mold means existing articulation, so War Machine mostly moves well, but his ankles don't go very far. Both hands are fists, rather than having one open. He's still got the mini-railgun mounted on his back, but the hinge on mine is loose, so posing it is difficult. The suit is grey and silver, but still has the same white tampos on the left side as the previous release.

Adding a little bit of value to what would otherwise be a rather unexciting repaint, War Machine comes with an alternate head. Similar to the Iron Man Mark 43 from Series 1, the armor's faceplate is flipped up to reveal the man inside - a feature that would have saved a ton of trouble in IM3. The flaps on the mask are small, so don't block Don Cheadle's eyes.

War Machine comes with the smallest piece of the Series 2

Hulkbuster Build-A-Figure, the head. It's round and flat, much like the Mandroid head, and will attach via a shallow balljoint.

This figure should have been released two years ago, and so should his other phantom figures. But the important thing is Hasbro finally got him out, and gave him a nice little bonus in the form of an unmasked head.