Once again, out on the road has yielded some pretty sweet scores, and, fortunately in pretty small volume, too - a nice relief after weeks of large hauls. So... let's get to it, huh? 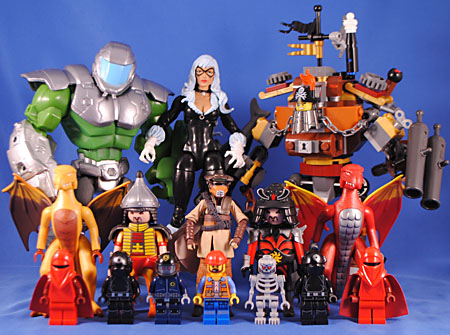 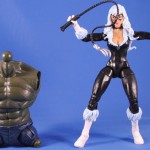 Much like Toxin ol' B.C. was an acutely felt hole in my collection after deciding to be back to All-In status with Marvel Legends, which was only exacerbated by how uncommon she was even when this series was still on shelves. Toxin was a bit of coup to score now but finding Black Cat as the sole ML on the pegs at a Toys R Us was just too good to be true! She's a good sculpt, the furry cuffs turned out great, and the paint is pretty clean, too. Articulation is the only sore spot for me with the hips being pretty limited in their range and the wrists have hinge joints but either they're too shallow or the forearms are too deep because they barely function. She comes with a surprisingly cool whip/claw accessory but very annoyingly her grip is too wide to hold it effectively. She also comes with Ultimate Goblin's torso, which is actually kind of cool because Toxin came with his head so now, thanks to these doubles, I can make a little mini-bust. Sure it's not the coolest thing ever but it's certainly much more appreciated and much better forethought that just having more, spare random limbs that are good for nothing. 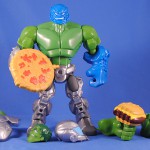 When I saw this at Walmart clearanced down to $9 I just couldn't help myself. The core figure gives us the silly techno-armored and short lived "Marvel NOW!" Hulk. Weirdly only his right forearm is armored, I have no idea if that's accurate or not but it does kind of look odd. He comes with removable chest armor and a helmet that fits over his head (it's not an alternate head as I expected and it seems an odd choice since this format is built around interchangeability), there's also a big green horned and ridged attachment and a big green fin/blade attachment - I don't understand them, are they just "things" or could Hulk extra-hulk-out, or... what? Then there a giant missile launching gun and two little, blue shield thingies that I suppose plug into his various orifices. To help sell the gimmick he comes with A-Bomb's head and left forearm, because who doesn't love an incomplete figure? I mean... is A-Bomb available as a full figure? Is the rest of him packed in with other figures? My guess is, "No." So then, I must ask, what the hell is the point? But, anyway... toy food! this set comes with a pizza and a hamburger. Why? To what in end? It's just weird, crazy toy fun. I don't get why they're here but I'm tickled as heck that they are! Both have a peg on their underside, and the pizza gets one on the crust too, allowing them to be held in hand or plugged into any number of the weird, goofy pegholes littering Hulk's body. 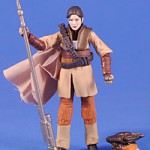 I found her last week with the rest of the new series but I honestly couldn't tell if she was new or a re-release and the paint was so bad on those I just decided to wait. It turns out she is an all-new figure but appears to be the same sculpt as the 6" version, which is probably why she looks so familiar. The sculpt and articulation are pretty nice. She's got the thermal detonator sculpted into her left hand which I actually quite appreciate, though a hinge joint in there would have certainly helped the pose look more natural. Her little cape is softgoods sewed around the back of her bandolier and it looks better than I would have expected. The head is nice, and I like that the hair is sculpted up unlike the last version of Boushh, but the skintone is pretty pale and the hairline paint has been pretty sloppy on most of the figures I've seen. She could use a gray wipe or something over the outfit to dirty/age it up; it just looks too clean and bright as is. This is a fine figure, but it's nothing terribly special and honestly something I would have rather seen as an all-new sculpt in the 5POA line. 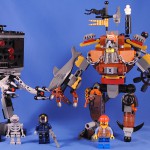 It's really weird that for how much I loved The Lego Movie I have so few of the sets... But finding this for about a third off at Walmart meant it was absolutely time to take the plunge! The build is a nice level of complexity and the resulting figure is pretty pose-able. I had thought the peg leg was a missile launcher with one of those rubber-tipped missiles but it's actually just fully brick-built and fortunately pretty stable. There is a big sword for him too, which he can hold or can be clipped to his back. The left hand is just two cannons attached by a single peg each so they are annoyingly free-turning whenever that arm is handled. The Micro Manager is... I just don't like the look of it, it's just not interesting or compelling. It is, though, a remarkably elaborate build. It's cool but easily two-thirds more complex and more bricks than is necessary. The set comes with a robot skeleton, robot cop and a construction worker - they're neat but nothing special. This is a nice set but everything other than Metalbeard himself just seems like filler. 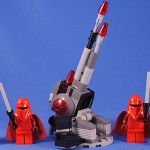 I really dig the idea of this set, but ultimately there's something kind of uncompelling about it. The gun build is a fun idea but not that great in execution. The build is only okay and only the the top most missile is fire-able, and the whole thing is on a loose hinge joint so hands-off it's either pointing straight up on leaning on the ground... Not to mention this weapon is only seen in use from inside the Death Star so it's not terribly play-with-able. But, no one is really buying these sets for the builds - it's all about the mini-figures. The Gunners are pretty cool, with printing on both the torsos and the legs and even the face underneath the really well sculpted helmet. The Imperial Guards are neat, too. Their awesome helmets have the visor cut out and they sport all-black heads underneath. The capes have a maroon print on one side (presumably the under-side) but only have printing on the torso. It would have been cool if they'd come with alternate slope-brick "legs" to complete the "dress" look from the movie. Their staffs are also "only okay" since the small size and mini-figure arms aren't conducive to the traditional staff-holding pose. I might use some of those little claw pieces to make a handle allowing to them to hold the staff upright with their arms at their sides. Walmart also had these marked down to $9 so I got two, for future building of battles. 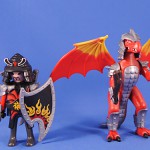 Well, Toys R Us had this line clearanced out at $5/per, so I figured "what the hell, lets complete 'em." The soldier is another design that skews too fantastical for my tastes but the predominantly black color scheme is neat. He's got two sheath-clips on his back to hold two katanas, but for some reason his helmet won't stay on his head very well. The dragon is neat, though the silver scales are weird. Like the Blue and Black Dragons his arm armor fits on regular figures too. I dig his fiery staff, that it is pretty fun and occult-y. 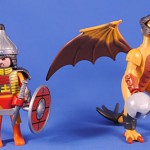 The short sleeves on this guy kind of ruin his look for me but other than that he is plausibly historical for my tastes. I really love the standard on his back (the same as with the blue dragon's soldier) and I'm fully split on his Darth Maul sword - it's equally cool looking and implausibly goofy. The dragon is pretty cool, and might actually be my favorite in the line... The light brown/mustard yellow colors complement each other well and feel biologically believable. He comes with one, giant Wolverine claw that, much like the double-sword, is cool and ridiculous all at once (though I'm netting out on "cool" with it). For whatever reason the set comes with a small boulder... because.

This entry was posted in Hasbro, Lego, Playmobil, Rustin's Spoils of the Week and tagged dragons, Hulk, Spider-Man, Star Wars. Bookmark the permalink.

8 Responses to Rustin's Spoils of the Week #173