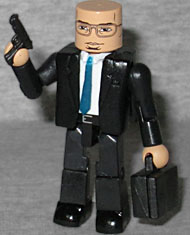 operations around the world. When one goes awry, Captain America and Black Widow are sent in.

Jasper Sitwell, in the comics, was a scrawny blonde guy who mainly served as SHIELD's liaison to Tony Stark - so, kind of like the Phil Coulson role in Iron Mans 1 and 2. Jasper Sitwell, in the movies, was a bald Hispanic man who first appeared in Thor, then in several of the one-shots, and seemed to be Coulson's partner. This figure is wearing an unremarkable black suit with a blue necktie, and comes with a pistol and a briefcase that actually opens (though I'm worried the hinge will snap). The likeness looks very much like Maximiliano Hernández, and not only because of the glasses. He makes Sitwell look like a perfectly pleasant, unassuming kind of guy.

A mercenary for hire, Georges Batroc comes into conflict with Captain America 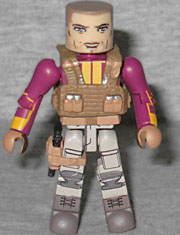 when his band of soldiers hijacks a S.H.I.E.L.D. vessel and takes the crew hostage.

BATROC THE MUTHA-FLIPPIN' LEAPER! Creating a live-action Batroc might be an even more impressive feat for Marvel making the entire world care about a talking raccoon from a cold start. His shirt is yellow and purple, though it's hidden beneath a fancy tactical vest. He's got tan cargo pants, and a holster on his right thigh for the set's second pistol. The likeness of Georges St-Pierre is decent, but he should really have some goatee and mustache stubble. And really, one of those "flip" waist stands would have been a perfect inclusion for him.