Ladies and gentlemen: the story you are about to hear is true. Only the names have been changed to protect the idiots.

Last weekend, we posted my review of Jayne Cobb. Someone (after sadly trying to blow a dog whistle on Twitter, and not getting any response) linked to it on Gamergate's pet subreddit. And then the nerds got angry and confused.

Some InuYasha Fan: That 'review' goes from one talking point to the next within a single sentence. It is like reading something from a mentally disturbed person. Even taking out the stupid and impulsive jab at Gamergate.

That's adorable. Apparently Some InuYasha Fan is unable to grasp complex sentences - and by "complex," I mean "written above a middle school level." Oh no, analogies, comparisons, and parallel structure understandable by 15-year-olds are too difficult for him to parse? What a shocking and unexpected development this is! Maybe if I took some screenshots and used MS Paint to draw some red lines all over them, he'd be able to follow the narrative line?

Also, "impulsive"? 1, we've been ridiculing Gamergate since the beginning, and 2, you can't talk about Adam Baldwin without talking about his crazy politics (he believes Obama let ebola into the country on purpose because... reasons?) any more than you could talk about Bill Cosby without bringing up that he's a serial rapist and has been since the '70s.

And while we're at it, if anyone can identify a single sentence in the review that jumps between unrelated topics without any sort of relevant transition, I'd certainly be interested to hear which sentence it is.

Jack: The picture that's supposed to explain GamerGate is also so incredibly biased. I can't believe it was made for someone to buy into it.

Like Rob Corddry once said, the facts have a well-known liberal bias. 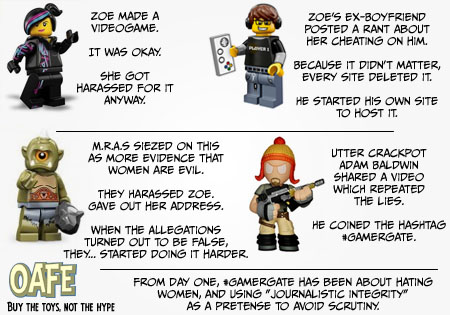 And them's the facts, Jack.

NoRibs: "Unrepentant"? They're not even pretending it isn't a religion anymore.

This, children, is why we don't only learn our grammar from Indiana Jones movies. NoRibs is confusing "unrepentant," meaning "not sorry," with the scene in Last Crusade where "only the penitent man shall pass."

bunchofrandomletters: Their relatively recent Nova review is also laughable. They're reviewing nerdy toys, surely they could avoid bragging about not knowing the toy's source material and turning their nose up at those who do

That would be this Nova review. The one that, after a paragraph admitting my own ignorance, explains who the character is and what all her gear does. It seems bunchofrandomletters doesn't understand the concept of "doing research to learn" and "making sure your statements are correct." In response to that, Ironic_Retro_Name said:

Ironic_Retro_Name: Gotta throw your readers under the bus to get a chance at the cool kids' club, even in toy reviews, of all damn things.

Yeah, that's us, we think we're so much better than everyone else. It couldn't possibly be that when you write about a character most people aren't going to know, it might be a good idea to tell them right away that it's okay that they don't know who it is, that we're all going to learn together.

Self_Important: Oh no, criticism from someone who reviews dolls made for five year old kids..."

"Oh no, criticism from someone who willingly identifies themselves with the dumbest bunch of misogynists this side of an MRA convention..."

Welty: Injecting your personal politics and agenda into your job?

"please remember that all content is political. If you write about pop culture and never write about, say, racial stereotypes in movies, then you're making a strong political statement (specifically, that racial stereotypes in movies aren't worth noticing or worrying about). Every word you fail to say conveys an opinion on some subject. [...] The point is that they tend to only feel political when you disagree with them. But don't let me or anyone else tell you that their content is unbiased. There is no such thing -- that's the most common lie content creators tell. They're trying to convince you that their particular point of view is in fact the cold, logical truth. [...] if you ever find a site that you think contains no political message whatsoever, it simply means their politics happen to align with yours."

(That whole article is interesting. Go give it a read to see what context we cut out using those mid-sentence ellipses.)

Pretend Barbarian: Some people may only know one side. This is what SJWs want, one side so people cant see both sides. I dont know how much does this person from a figure site knows about all of this.

Yes, some people may only know one side; that's why we make sure to educate them. Because at the end of the day, it's Gamergate, like every other hate group, who relies on people being ignorant of both sides of the story - it's the only way anyone will buy into the lie that it's about anything other than hating feminism. We could post videos by people much smarter than us--

--but making fun of idiotic misogyny in comic form gets the information across easily.

In recent years, the Ku Klux Klan has tried to rebrand itself, claiming that they're not about hating other races, just that they're about advancing white pride. But decades of history are stacked against them, and everybody knows the truth too well for such a transparent gambit to work. Other groups, like Gamergate or One Million Moms (a subsidiary of the American Family Association) have learned the lesson that you need to hide your hate, or couch it in obfuscating language in order to make it palatable. Nothing is more harmful to their causes than an informed and educated populace, and we like to do our part to make that happen.

DeeplyConfused: The picture they use to call his hat "more memorable" is a girl in a bikini, but we're the sexists?

Wait, is it... is it possible that the only reason Gamergate thinks they're not a misogynist group is that they don't actually know what sexism is? I mean, clearly they don't, but could it really be that simple and run that deep? Yes, I linked to a picture of a cute girl in a knit bikini; but outside of Valerie Solanas/SCUM-type radical second-wave feminists (who these KiActivists likely know best as "the Velma stand-in on that Scooby-Doo episode of Venture Bros."), no one thinks finding a woman attractive and admitting it is sexist. The person who made that bikini is clearly proud of her work and the way she looks in it - I'm not reducing her to an object by saying she looks awesome. I also don't have the desire to stalk her online, down-vote her opinions or call her a whore if she doesn't smile at me. Amazingly enough, you can call someone sexy and still respect them as a human being.

They say you can judge the quality of a hero by the caliber of his villains. If that's true and Gamergate is our enemy, well, it still doesn't make us very much, because they're the sad cold end of a wet fart. But it at least puts us in the same company as their other foes, and that's a good group to be in...

This entry was posted in comics, commentary, videos and tagged Firefly. Bookmark the permalink.