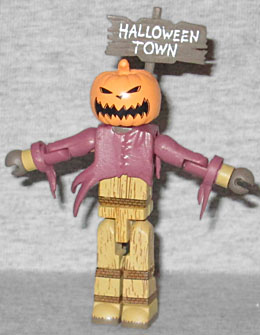 When Diamond Select Toys gets a license, they go all-in. So we get Select figures, but they also use Art Asylum to make Minimates. Which is why we can get a big fancy Oogie Boogie, but also smaller figs. Series 1 was available blind-bagged (and had enough distinct shapes that squeezing the bags was a reliable way to get what you wanted [assuming you could ever find any]), but now Toys Я Us has more traditional two-packs.

This is, according to the back 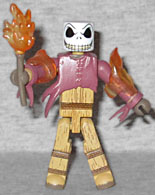 of the card, Series 2, which explains why we're not getting plain Jack Skellington. This is Jack in his Pumpkin King guise. He's got a jack o'lantern head (and a regular to replace it, if you want), bundled straw legs, and a tattered shirt over his extra-long torso. He has new stringy sleeve pieces that fit on his wrists, too. There's a slot in the back of his shirt where the Halloween Town signpost fits. For his appearance in the town square, he's also got a flaming torch (a new mold, not reused) and flame pieces that fit on his arms.

Jack is paired with his faithful dog Zero. Art Asylum really went above and beyond for this figure - since Zero, in the movie, was basically just a dog's head and a billowing sheet for a body, you'd expect the Minimate version to be a solid piece. That's what a sane company would do. But that wasn't good enough for AA, who actually made his head a separate, fully articulated piece! His neck is a balljoint, allowing him to look all around adorably. His ears wave behind him and his pumpkin nose is orange. The entire body is cost from semi-translucent plastic, making him look spectral, an effect only slightly marred by the copyright text tampoed on his back.

He gets a new hover stand, as well - it's mostly the same as the ones we've been seeing ever since Slimer, but there's now a hollow in the bottom so it uses slightly less plastic. Economical! The really fun thing is that the set also includes Zero's dog house, which has been appropriately Minimatized: it's got the shingle roof and the cross on the gable, but the skull and crossbones on the "door" area are now shaped like a Minimate head. Outstanding!

Either of these figures would have been worth buying alone, so putting them together in one pack? A must-have!