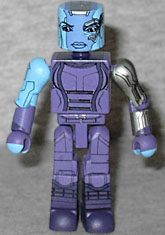 The deadly fighter Nebula is part of the group hunting the Guardians to acquire the orb for their master, and shares a history with Gamora.

Nebula, when I knew her, looked like this, so when Karen Gillan was announced for the Guardians of the Galaxy movie, I thought she'd be playing Angela. But it turns out this look, with a bald head, mechanical arm, and various cybernetic implants, is very true to the comics! The paint on the Minimate is excellently done, with very small, intricate apps and details that don't stop on the tops or sides of the body. She doesn't include any weapons, so she'll just have to make do with her fists. 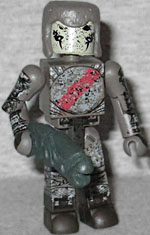 Ronan's personal shock troops, the Sakaarans are a fierce and aggressive race, known for their militaristic culture.

We already reviewed this figure once, in the TЯU-exclusive set, and everything said in that review holds true: namely, that just painting his details doesn't work as well as a molded piece would. So here's a patented OAFEnet Fun Fact: James Gunn's original plan for the movie was to use the Badoon (an alien race that's got a long association with the Guardians of the Galaxy), but because the Badoon first appeared in Silver Surfer #2, the rights to them currently reside at Fox.