A soldier and assassin, the green-skinned Gamora is wanted on over 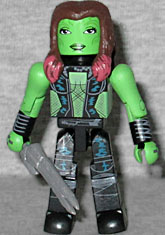 a dozen counts of murder, and is one of the most dangerous Guardians.

Ah, Gamora. The first character to really get the "where's the toy" complain-wagon rolling (or Tumblring), when, just like Black Widow and Rey, the answer is less "they didn't make her" and more "your dumb ass doesn't know where to look." This figure's skin is a very vibrant green, more like the movie posters than the movie itself, and all her costume details are painted on. That means we get nice artistic design for her pants and "shirt," and the fishnet detailing actually continues around her sides instead of stopping on the front. We could perhaps use some stronger color contrast on her hair, but they did a nice job with the markings on her face. She includes her sword, because violence is awesome.

The galaxy's police force, the Nova Corps are keenly interested in the 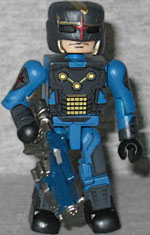 Guardians of the Galaxy for their outstanding warrants alone.

How crazy is it that both times Gamora has gotten a Minimate, she's been paired with Nova? The movie's Nova Corps looked more martial than the comics' version, with uniforms that look more like outer space SWAT gear than a superhero suit. They still have the three stars on the chest and a helmet with a red crest on the forehead, but they look like law enforcement now. The chest looks like a bulletproof vest, there's armor on the thighs, insignias on the shoulders, etc. Also, the body is a really nice blue. He's got a fancy blaster, painted dark blue and silver, and his helmet is removable. It's a shame they couldn't include some hair for when you take off his helmet: a curly piece for Rhomann Dey or a combed one for Denarian Saal would have been really cool.