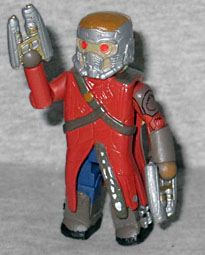 Calling himself "Star-Lord," the human adventurer and fortune-seeker named Peter Jason Quill is being hunted after stealing a mysterious orb.

Minimate Star-Lord suffers from the same problem as ML Star-Lord: the toy was developed before the movie costume department decided that a short jacket would be better than a long coat, so the articulation suffers - it's hard to have him sit in the Milano. The coat is sculpted nicely, and includes his backpack, so it's clearly not the same one Yondu wore. Bonus points for giving him his jet-boots as new molds, and for arming him with his twin pistols. 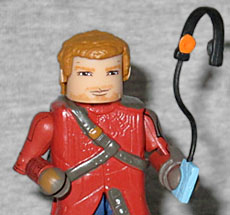 The face isn't great. His facial hair - beard and eyebrows alike - are so similar to the skintone that they can barely be seen at all. He's got a nice smirk, but either darker hair or painted outlines would have helped a lot. If you don't like it, you can instead give him his battle mask. The set also includes his walkman and headphones, though they don't fit on the standard Minimate head very well at all. More of an Easter egg than something the toy can actually use.

A powerful villain with ambitions that threaten the entire universe, 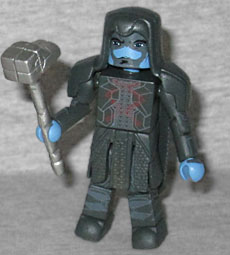 Ronan hunts Star-Lord in order to claim the orb and its power for himself.

Ronan was a lot scarier in the movie than he'd ever been in the comics. It would be nice if his costume had a little more color in it - the dark grey certainly makes him look more judicial, but the green would stand out better. A few red lines on his chest just don't cut it. His skirt has a lot of molded details, matching the shapes painted on his torso, which makes sense since they're technically supposed to be one large garment. Like Star-Lord's coat, except this allows him to retain his waist. His hood, shoulder pads and capey things are all one big piece that fits over the head and upper body. He comes with his hammer, though the head is upside down compared to the actual thing.