Round 3 of Mattel's MotU Minis brings us back to the varsity squad on the heroes' side, with the winged warrior Stratos. But did you know that Stratos was almost on the other side? In the 1981 licensee guidebook, he was identified as "a villain soaring 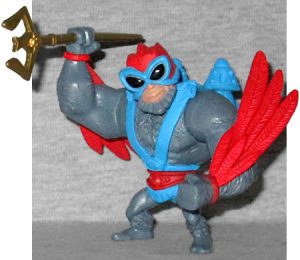 on Wings of Wickedness, filling the sky with evil schemes." That's the advantage of just building your world out of random weirdos: you have right up until release to decide which side they're on.

Stratos is sculpted in the same cutesy little style as the rest of this line, with huge arms and tiny legs. He has a bit of fur sculpted on his forearms, chest and shins, and the feathery harness for his jetpack is molded as part of his body. He's got his big red wings, obviously, but is missing the rings that held them to his upper arms. His jetpack is so big that it's tough to keep him standing. The figure includes the Staff of Avion, and artifact from the Filmation cartoon (not to be confused with the Emerald Staff of Avion).

The villain this time may not be major, but he's certainly memorable - it's Scareglow, the evil ghost of Skeletor! Conjured from another time to frighten travellers, Scareglow is invisible in daylight but glows in the dark. Well, the character is. 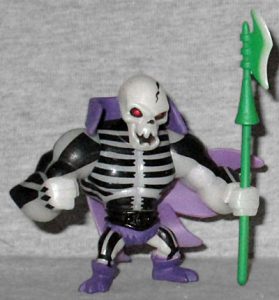 The toy is perfectly visible in daylight. Still glows in the dark, though, thanks to being molded in GitD plastic.

Actually, that plastic might be a problem. Like the rest of the MotU Minis, Scareglow is meant to move at the neck, shoulders and waist. His right arm, however, is stuck firmly in place. I tried freezing it, I tried boiling it, I tried just getting in there and prying it loose, nothing at all would work; that arm is going nowhere! It's not a major problem, just annoying. The black paint that breaks up his body is applied cleanly, and since his billowing cape is not removable, his back is fully covered - no fancy pattern. He's armed with his halberd, which works just like the Classics version and can be held in either hand.

Buy all six MotU Minis sets, and you'll be able to build your own miniaturized Castle Grayskull. Set #3 includes the top of a tower. It plugs into both the pieces we've already taken a look at, and has a little space at the top for a figure to stand.

Even with his bum arm, Scareglow is a great little figure - his glowing action feature makes up for it, and his skeletal head is right in the Lagrange point between "creepy" and "adorable." Stratos, meanwhile, would be cooler if he could reliably stand up.

This entry was posted in blog exclusive review, Mattel and tagged GitD, MotU. Bookmark the permalink.