The daughter of the slasher known as "The Lunch Lady," Cassie 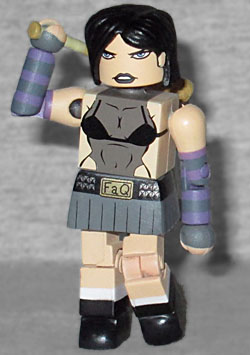 Hack has dedicated her life to finding and stopping slashers and other serial killers.

Isn't that an awesome premise for a comic? Hack/Slash started as a series of one-shots before becoming an ongoing, and Cassie was its star. She dresses like she was specifically created to give Suicide Girls something to cosplay, with stripey fingerless opera gloves, a mesh bodysuit over a black bikini top, a super short skirt with a studded belt and a large "FaQ" buckle, white knee socks and black boots. Her hair is a new piece, tucked behind one ear, and she's got an "I'm not taking any of your crap" look on her face. She's armed with her unique baseball bat: it has nails driven through the barrel, and has "KISS IT" carved on the side. Points for not reusing an existing mold!

You might expect Cassie to come with her big monster-slaying sidekick, Vlad, but nope: instead, she's paired up with a character from Revival, another comic from the same author.

The dead in a small town have come back to life. Em Cypress is one of

the Revivers, and has two mysteries to solve: how she died, and why she came back.

Not a lot of comics set in Wausau, Wisconsin, are there? Described as "farm noir," Revival is like a Coen brothers horror movie. Em (Martha to her parents) is wearing her grey hoodie with black bones on the arms and hood, a black halo on the crown of the hood, and black wings on the back. It's also painted with the li'l red stitches she uses to mend her sweatshirt when it gets torn up. The hood is a new mold, with the skull and halo patterns sculpted in. She looks almost as angry as Cassie, but there is one little feature missing: since the only initial evidence she was dead was a small scar on her forehead, it would have been nice if they'd included that in her face tampo.

Again, it's weird that Em comes with Cassie. This could easily have been a straight Revival two-pack, including her sister Dana or one of the "Creeps" that are a major part of the story. But maybe writer Tim Seely wasn't sure there'd ever be a Series 2, and so wanted to get as many of his creations representation as possible. Hopefully there is a Series 2, and it'll have a weird Vlad/Dana two-pack to go along with this one.
Previous | Next