This is the latest in a series (of indefinite length and regularity) of blog posts memorializing cancelled toys. Our figure today is Tonka's Fossilsaurus.

Fossilsaurus would have been part of the GoBots-spinoff Rock Lords line, a four-figure combiner that turned into a T. rex skeleton (or something thereabouts): 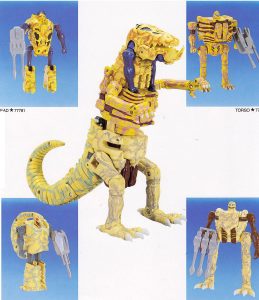 While a version of this toy was released in Japan (and was even animated, as seen in the video below), "the Fossil Lord team" lacked the bony design seen on this prototype. Apparently the members of the team had very straightforward names: Jawbone, Ribcage, Hipbone and Tailbone. Bandai apparently tried importing him with a different colorscheme, but it still didn't happen.

This entry was posted in cancelled toys, videos and tagged Transformers. Bookmark the permalink.