When Steve Rogers had the Super Soldier Serum 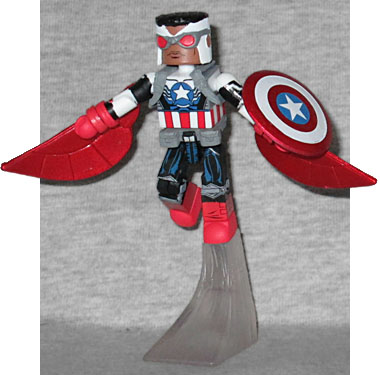 in his blood neutralized, a new Captain America was chosen - Steve's old partner, Sam Wilson. Wearing his trademark wings, the new Cap is a high-flying symbol of freedom.

Yes he is - so why is this figure called "Falcon as Captain America" and not just "Captain America"? Falcon probably wasn't anyone's first choice to take over for a newly decrepit Steve Rogers, but his usual red and white costume looks really nice with a dash of blue. He has new wings that are mounted on rings that go around his wrists - the left one has a post for the shield to clip onto. He's got a new grey harness and a belt with pouches, plus kneepads painted on his legs.

The set includes a flight stand, because Falcon is the first Captain America who can independently fly. You can remove the wings, obviously, and you have the choice to either leave him with plain hands, or give him the "wrist strap" hand that will allow him to use the shield. if you take off his mask, the set also includes new hair for him. 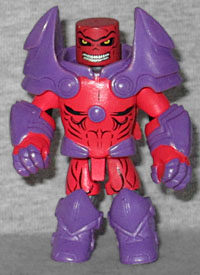 You already know the story behind Red Onslaught, so we won't repeat it here. This Minimate is obviously going to be a repaint of the Onslaught from Series 50, a way to reuse some expensive molds. The colors on this one are flat instead of metallic, but the detail apps are otherwise the same. The Red Skull head is new and definitely based on John Cassaday's artwork. Unlike the Marvel Legend, which had to deal with licensing restrictions, this one is free to include a Magneto head right in the box.

But just that would be boring. The strength of Minimates is 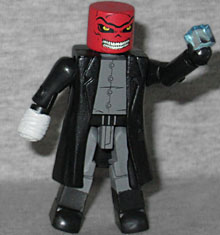 their modular versatility, so switching between Skull and Magneto heads is no big deal, so this one goes above and beyond. Strip off all the armor, and you can turn this into a plain Red Skull! The body is completely intact under the armor, then we get new hands and feet to complete the deal. He wears a black trenchcoat, and if you don't just want him to have plain hands, there's a bonus set included as well: one holding a translucent blue Cosmic Cube (though he never used one in the story these figures represent), and one bandage. The moral of that story is "never piss off Wolverine." The moral of a lot of stories is "never piss off Wolverine."

With the first Falcon-Cap toy and two Red Skulls in one, this is a really nice pair of figures.