Two of the black characters in this series are exempt from the One Black Man rule, by virtue of being women - there's Michonne in her police uniform, and there's Sasha. 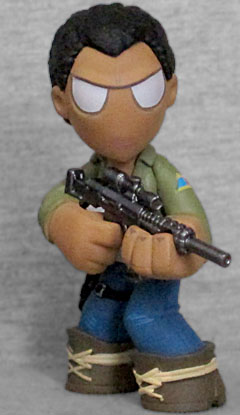 Sasha is not a character from the comics. Actress Sonequa Martin-Green tried out for the role of Michonne, but while she didn't get it, the producers liked her so much that they created a character specifically for her (meaning that this Mystery Mini could have been made even under Series 1 rules). Sasha does feel kind of like a replacement for the comics' Julie: Julie was Tyreese's teenage daughter, while Sasha is his younger sister. 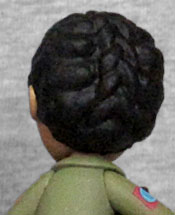 baggier clothes, because Martin-Green was pregnant. Part of that is Bob's army jacket, which has painted patches on the arms representing very simplified versions of the 82nd Airborne and 1st Armored Division insignia. Her pants are tucked into her boots, and the laces are sculpted on, both the crossed bits and the strings circling the ankles. She's armed with her AR-15 rifle, which is shaped specifically to fit into her fingers, and her hair is done up in a really complex braid. Impressive work!