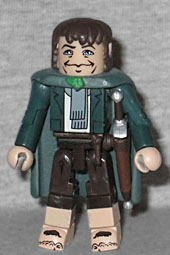 got to know the dwarves well enough to tell them apart. And while that's a fair statement, the same can be said about Merry and Pippin - it wasn't until they got split up in the third movie that they got even minorly distinct. They're so similar, in fact, that we just copied this paragraph from the Merry review and you probably didn't even notice.

Peregrin "Pippin" "Not the Musical" Took is a Hobbit, so he uses the usual 2" Minimate body, not the 2½" version created for the humans in this line. Surprisingly, the Fellowship cloak he wears isn't the same as Merry's - that's the only molded costume element, leaving his brown pants, green coat and his scarf to be done with paint. His hair is his own, and his feet get the same paint masks for the toes and hair that Merry did, just in a new, darker color. He's armed with his small sword, and its scabbard plugs in above his left hip.

This Uruk-hai is much less naked than our last one. He's got the dark red skin, but covers it with silver boots, new gloves, pauldrons over short chainmail sleeves, 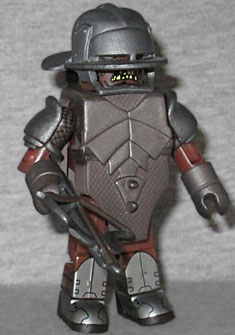 and a full chest cap with plates of jagged armor strapped over the mail shirt beneath. The helmet is a separate, removable piece (it takes his stringy black hair with it when it goes), molded with large, flat, flared plates on the front and back that probably help deflect enemy weapons. It has a chin strap and eye slits, but if you push the helmet all the way down onto the head, the eyes don't quite line up correctly - you just need to leave it up a little bit.

He's armed with a crossbow, because otherwise how could he be a crossbowman? Crossbows didn't appear in the books, just the movie, because Peter Jackson wanted the Uruk-hai army to be a threat even before they got into melee range, and he didn't think they looked right using bows (Lurtz notwithstanding). The accessory is detailed nicely, but doesn't fit in his hand very well, it must be said.