During the invasion of Earth a Skrull warship stopped to attack a human baseball game. Luckily, the team's mascot was actually 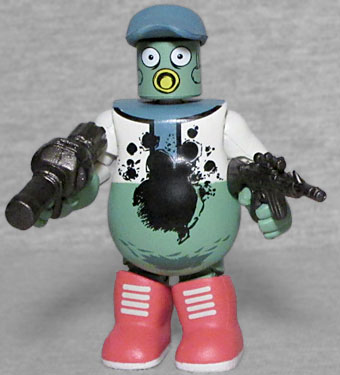 It's never said what baseball teams are playing, but one of them seems to be the Braves (judging by the letters the shirtless fans have painted on their chests), and one of their mascots seems to be the "faded in the wash" version of the Phillie Phanatic: big arms and legs, a portly body, etc. There's fur painted on the body, and a big black blaster hole through the chest. The head is a standard Minimate cylinder, which isn't enough: the mascot suit had a bullhorn-shaped mouth and fuzzy dangly ears, and both of those have had to be painted on flat here. Putting a 3D cap on the head just doesn't cut it. You can't even see his googly eyes! (The hat was designed to be worn backwards.) Ideally, the head would have been a sculpted mask that fit over the normal Deadpool head, rather than giving us two different heads. He gets big guns and an alternate chest and arms if you want to remove the suit.

Bob was a cowardly Hydra goon that Deadpool took on 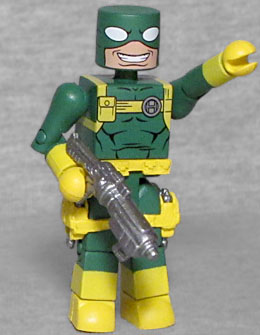 as a pet minion, forcing him to steal a plane, fight a dinosaur, be a pirate, and re-attach Deadpool's severed head.

Bob was originally just a normal Hydra agent (he joined because his wife wanted him to get a steady job), so he wears their traditional green uniform. The belt and holsters are add-on pieces, but the rest of the details are simply painted on. That's fine, he doesn't need his harness to be sculpted. He's armed with two silver handguns and a fancy Hydra rifle, and you have your choice of two heads: one with a big smile (despite the fact that Hydra doesn't offer full dental plans, the way AIM does) and the other with an uneasy grimace, probably from being scared senseless by Deadpool's latest harebrained plan. 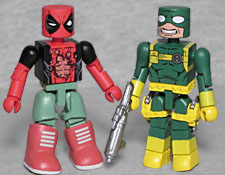