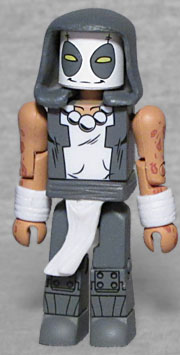 Hit by an Inversion spell during the battle with Red Onslaught, Deadpool creates a new personality, one that practices nonlethal combat techniques and is generally pretty chill.

Yep, this is an Axis figure, just like all the ones back in Series 62! Wade is just crazy enough that getting his personality switched also changed his clothes: red-and-black is out, grey-and-white is in. He's got a hood and a breezy loincloth, and his arms are bare (and painted with scars). He also has a necklace of huge prayer beads, but that's just been painted on, so it looks like flat discs. Guess there was no way to reuse the necklace from the old Street Fighter II Akuma. Since he's aiming for a more enlightened life, Zenpool doesn't have any weapons. But he does have a waist flip stand and... a baby Deadpool? That... doesn't really make sense. The fact that you can see his smile through his mask is cute. 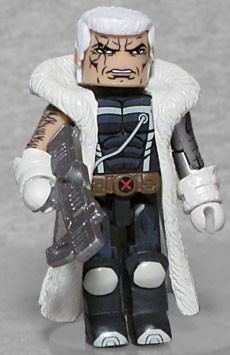 The infant Hope is the first new mutant in years, and rival groups battle to possess her. But Cable has sworn to keep her safe, taking her to Alaska and getting a sweet fur cape.

These bios have definitely been irreverent and fun, haven't they? This is Cable in his Humberto Ramos costume, all dark blue with white accents. The white cord coming out of his left nipple should technically run into the right glove, not the belt, but what makes sense in art doesn't necessarily make sense on a toy. His face is appropriately stern, and includes the scar over his right eye. His belt, boots, gloves, and sweet fur cape are molded pieces, but there are so many shadows painted on his chest that it looks even more three-dimensional than those do!

Cable's accessories include the squarish tech gun we've seen several times now, because Cable and guns go together like gun-owners and cowardice. You can take off

his coat (which, it must be said, will do wonders in getting him to be able to stand up unaided - good thing these sets include disc stands, huh?) and replace it with a simpler pair of shoulder pads, complete with a tampo of the star logo on the right shoulder. It works really well, and gives Cable two distinct looks. The Baby Hope is technically an alternate right hand, reused from the Walking Dead Minimates. And since she and the Baby Deadpool have a white hand cradling them, rather than a pink one, we can be sure that both accessories are meant to be held by Cable, not by Zenpool. Eh, it's not the first time we've gotten a silly Deadpool figure that has nothing to do with the comics just as an excuse to reuse some existing molds in a fun way.