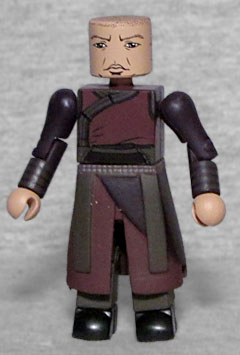 The Doctor Strange Minimates are out, but I'm getting them slowly. I didn't feel like ordering a complete set, so I'm left trying to pick up the sets I want individually when the price gets low enough - that's why we're starting with the least visually interesting pair in the series. In the comics, Wong is basically Dr. Strange's Alfred, serving and protecting him. And also teaching Strange some self martial arts, which makes Wong his master as well as his servant. The movie went more in that direction, making its Wong an adept when Stephen is still a neophyte. Almost the drill sergeant. He wears the standard purple robes of Kamar-Taj, though it's darker on the toy than the art on the back of the box shows. He's played in the movie by Benedict Wong, marking the first time a(n important) character in a comicbook movie has been played by an actor with the same name. 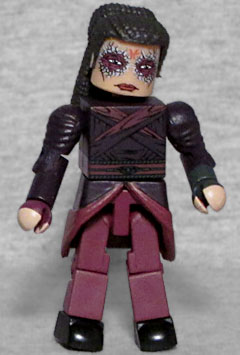 The Zealot is also wearing purple robes, because she was a former resident of the magical enclave. Two figures in identical colors do not a high-demand product make! In the movie, there were at least two female Zealots: the blonde one was more memorable, because we got to see her get stranded in the desert, but this is the brunette one. She... hangs around with the crew? Nothing major. Given Minimates' modular nature, this set really should have come with hair to create both of them. Even if it was the same mold in two different colors! Her clothes may be the same shade as Wong's, but the pattern is different: not just the skirt piece, but the paint on the torso and the puffy sleeves, as well. The shattered skin around her eyes looks terrific, but the fact that neither character has any accessories is annoying. Magical effects? The Wand of Watoom for Wong? Anything at all?