Leeloominaï Lekatariba Lamina-Tchaï Ekbat De Sebat (or "Leeloo" for short) is one of the Supreme Beings of the Universe, awoken every five millennia to defeat the Great Evil. She is the corporeal incarnation of the Fifth Element, which, 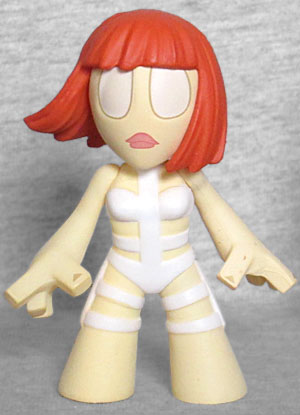 while never stated outright in the movie, has been confirmed by writer/director Luc Besson to be sex. Like, straight-up, sweaty, moany, "doin' it" sex, not "the concept of anatomical dimorphism" sex. Her name is a title meaning "Precious Stone of the Earth, the Honorable Defender of Light and Life," but Leeloo is the physical embodiment of physical love.

Fitting, then, that the Mystery Mini of her shows her in her "thermal bandages," the little strips of modesty-cloth that were wrapped around her after her regeneration. Actually, there's a question for you to ponder: we never see the Mondoshawans outside of their suits; Leeloo was rebuilt from nothing more than a few viable cells; the scientists suggest that her DNA is 5,000 times denser than human DNA; so is the only reason she looks human that she was found by human scientists using equipment that defaulted to human repairs? If she'd crashed on Plavalaguna's planet, would she be blue and have a big curly head? 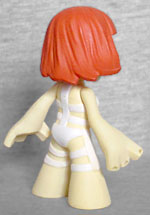 The bandages are sculpted above the surface of the figure, not just painted elements. In fact, the only painted elements on the figure are her lips, her fingernails, and the lining around her eyes. Sadly, she does not have her little elemental tattoo/birthmark/whatever on the inside of her wrist. It probably would have been too complex at this scale. Judging by the way her hair is sculpted blowing slightly to the side, we can assume this figure is taken from the scene when she's on the building ledge, trying to escape the military and the police. It's a nice touch that makes the figure - one just standing there with her arms a bit away from her sides - feel slightly more dynamic.

When this series of Science Fiction Mystery Minis was announced at Toy Fair 2015, Leeloo was not be alone - right next to her in the display book was control art of a Mangalore soldier with a gun, though that didn't make the final assortment for some reason. However, we're not left with only one Fifth Element figure... 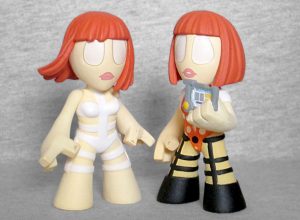