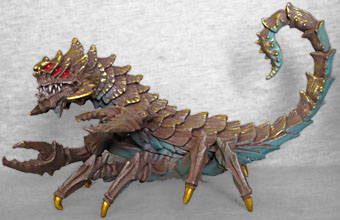 Characteristics:
From a distance, the Desert Dragon might resemble an overgrown scorpion, but the fierce, reclusive creature certainly qualifies as a member of the dragon family. In fact, it has the hardest scales of any dragon, along with one of the most powerful bites.
Size and Color:
A medium-sized dragon, its bronze color allows it to blend perfectly with the rocks and sand of its home, ensuring an unfortunate surprise for the unwary.
History:

The Desert Dragon appears in the tales of many who have traveled through the great Sahara Desert in Africa. Legends of a "fiend in the sand" or camels being swallowed whole have been passed from generation to generation by those who journey the hot, dry desert sands. History is full of tales of nomad camps disappearing overnight, or entire armies seemingly vanishing in the desert - tales that many think can be attributed to the cunning Desert Dragon. Disastrous treks into the Sahara by Napoleon's armies and the 20th century German army can also be blamed on the cunning desert dweller.

Story:
With thick, layered scales to keep itself cool in the sand, the Desert Dragon can spend hours resting, invisible, just below the surface, waiting for an unsuspecting victim.

A poisonous barbed tail, impenetrable scales, powerful pincers, and rows of razor-sharp teeth make the Desert Dragon a formidable foe, one that even the bravest choose to avoid. But one day, a mixture of bravado and luck led to the discovery of this elusive desert fiend. An experienced desert traveler attempted a north-to-south crossing of the Sahara, hoping to trade valuables from the cost with inland dwellers. He knew the locations of all oases, and he was careful to avoid the midday sun. He often traveled by camel at night to avoid the scorching daylight. One night, passing through a rocky outcropping, his caravan was attacked by an invisible enemy, camels wildly scattering in all directions. Fearing all was lost, the traveler discovered his bravery and chased after the dark object that had attacked his camels, wielding only a family heirloom sword. He cornered the beast against some rocks, but was shocked at its true size and ferocity. He swung wildly, felt metal bite into something nearly as hard, and was immediately knocked from his camel. As luck would have it, he'd been roped to his camel for nighttime travel, tied in place in case he fell asleep while riding. The rope held, the camel ran, and the traveler survived with the most unbelievable of stories.

This entry was posted in addendums, Safari Ltd and tagged dragons. Bookmark the permalink.