Well, the second wave of Series 1 finally hit stores, and the same reader who lent us the first set has been kind enough to let us review these, as well. 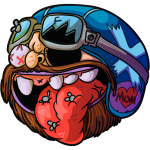 Bruise Brother's breath is more foul than his mouth. Untrustworthy, Bruise Brother is a master of bad ideas. He has a brotherly relationship with Horn Head as they go away back with lots of destruction in their wake. 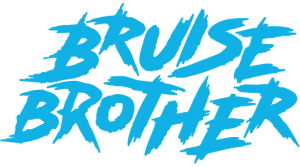 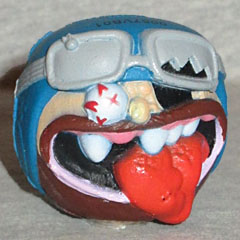 Hey, look at that! A new character! Wait, I'm being informed that he's not - he appeared in Series 2 of the Amtoy days, making him no more "new" than Wolf Breath would be. Bruise Brother is a dirty biker, the first Madball we've reviewed who's at least nominally human. He's got a bushy brown beard (with a bald "neck" spot just like his buddy Horn Head had) and his tongue hangs out of his mouth - you can tell he's been riding like that,

because flies have splatted against it. He's wearing a blue helmet, but it clearly hasn't been much help in his past crashes: his goggles are broken, he's missing an eye, and he's lost at least one tooth. There are cracks, holes, and tape on the helmet, but also a heart showing that he loves his mom - but only on one side.