Ernie Kovacs has a troubled mind, and will go to great lengths to protect the innocent as Rorschach. When someone kills an old colleague, his investigation into the death brings mysteries to light and puts him back in touch with the world's only known super-powered human - Dr. Manhattan. 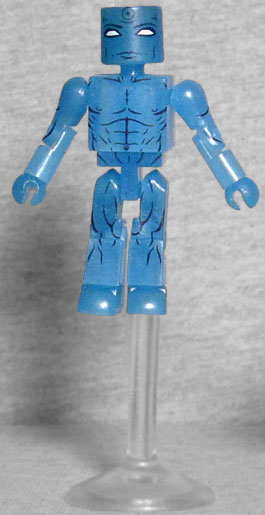 Remember when Mattel was making Watchmen toys and Monkey Boy chided them for not doing anything interesting with Dr. Manhattan, like casting him from blue glow-in-the-dark plastic? Chalk one up for the Minimate, which does exactly that. Remember how he said Mattel should have included a hover stand? The Minimate gets that, too. This figure is basically a refutation of every previous Dr. Manhattan figure. We ask you: has any other Manhattan ever been nude? No it has not! There's no paint there - the body has simple lines to create the anatomy everywhere else, then things conspicuously drop out just as you get to the main event - but the Minimate crotch block always looked vaguely like a wiener anyway. If you're squeamish about phantom genitalia, the set does include an alternate set of hips, this painted solid blue to represent his drawers. If nothing else, you know the figure he shares the tray with will be more comfortable if Doc has some pants on.

Rorschach gets a new trenchcoat and new fedora, 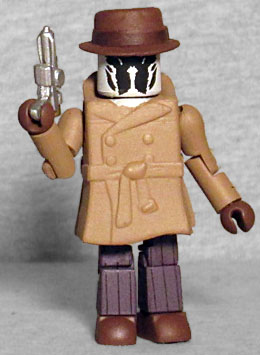 despite the fact that molds for both those pieces of clothing already existed, because the style he wears is different from everyone else. The coat has a belt cinching it shut and the collar flipped up, and the hat has no hair attached, since he's wearing his mask. He's got stripes painted on his purple pants, and his torso block is just the same brown as his coat, since you're not meant to remove it. We do get an alternate unmasked head for him, showing Kovacs unshaved, bruised, and generally filthy, as is usual. Shame we couldn't get a couple more masked heads with various expressions. The hair comes from various existing Eddie Brocks, which means it wasn't designed with his coat collar in mind - but you can pretend that the way it tips his head forward just represents his being uncomfortable in normal human interactions. He does have his grappling gun, though, and it gets silver and gold paint apps.
Previous | Next