So those four figures were all available in a single set through comicshops. However, there's one set at Toys Я Us that can be had nowhere else, and you kind of need it to complete the lineup.

A second-generation crimefighter, Laurie Juspeczyk followed in her mother's footsteps as Silk Spectre. Although she was never close with the super-intelligent hero Ozymandias, their paths would cross again when someone begins a campaign to kill or discredit former vigilantes. 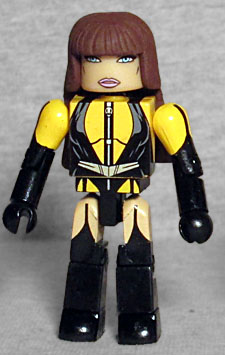 Most of the characters in the movie kept their costumes from the comics, but Silk Spectre is the one who changed the most. Gone is the see-through dress over a black unitard, replaced by a latex bodysuit that manages, as Artemis said, to be entirely un-sexy. Go figure. On the plus side, that makes painting this Minimate easier - the only molded piece she needs is her hair. Her visible skin is limited to the face and legs, and the color is different enough from the yellow of her suit that you can tell which is which. 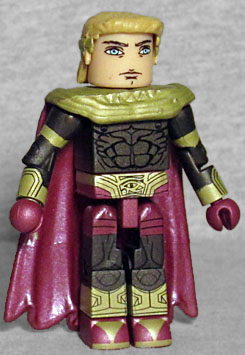 Ozymanidas' visual was much truer to the comics than Silk Spectre's was. Yes, he traded in his purple blouse and gold tights for a more form-fitting purple costume, light purple trunks, and gold accesnts on the boots and arms, but he still had the giant collar and the flowing cape. It's a bit surprising (though welcome) that they didn't make the bands on his arms a separate element, since lining up a tampo all the way around a bodypart can be tough - remember, that's the reason we're always given for why figures get two heads instead of just one with faces on opposite sides. Ozymanidas has a second head like that, allowing you to choose whether he should be wearing his domino mask or not.

So those are the Watchmen Minimates. Good offerings, if coming out oddly long after the movie. I mean, yes, it was a great film and successfully adapted a story that was supposed to be "unfilmable," but the internet at large has decided we're all supposed to hate it, right? Oh well. Hopefully these will sell well and DST will use their license to release more figures. Original Silk Spectre and original Nite Owl. Hooded Justice and teen Comedian. "Date night" Dan and Laurie. Moloch, Bubastis, Mothman, Captain Metropolis, Silhouette, Dollar Bill, Bernard and Bernie... the license probably doesn't cover the comics, just the movie, but there's still a lot that could be done - and hopefully will be! 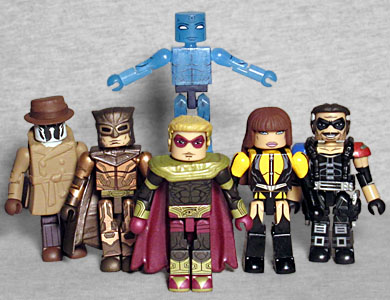 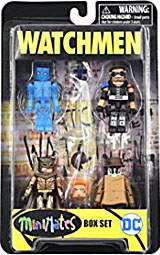 As a bonus, here's the text from the back of the four-pack release:

After the Keene Act was passed, outlawed crimefighter Rorschach went underground. But when vigilante-turned-government agent The Comedian is killed, Rorschach seeks out his old partner Nite Owl to get to the bottom of a conspiracy that may involve the world's only known super-powered human - Dr. Manhattan.
Previous