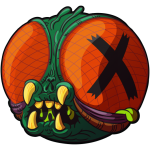 Need a hyper-atomic, triple-charged laser gun? Buzz Off is your man. Yes, he s a super-genius but also an annoying little brother-type with geek levels that are though the roof! 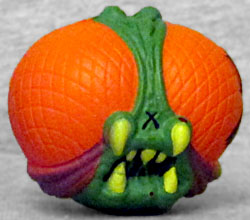 Well well well, look at this: the first new Madballs character of the Just Play era! So far all the ones we've reviewed have been updates of vintage designs - they haven't even touched any of the new ones Art Asylum came up with yet! Frankly, it's a bit surprising it took this long for Just Play to put their own stamp on the line (in anything other than artstyle, of course).

Buzz Off is not a bee, like the MotU character of the same name, but rather, a fly. The gigantic head of a fly. It has the bulbous compound eyes, little Predator-style fangs, and an itsy pair of wings sculpted on its back. The left eye has a massive black X on it, probably because putting hundreds of small ones on every facet of the eyes would have been time-consuming and looked bad. There are big bags under his eyes, and small antennae on top of his head. This is a good design that will look right at place in the Madballs pantheon.