Man... sometimes you're just like, "hey, I'm in Target so I might as well go check out what they have in the Toy section," and then you get there and they have a bunch of new stuff... Thus it is that we have Spoils number 190. 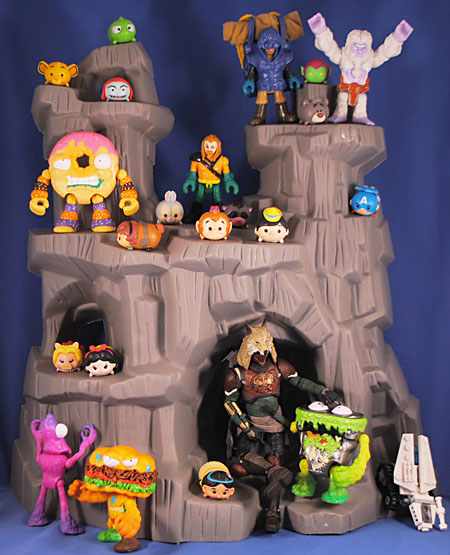 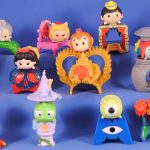 I've fallen madly in love with Jakks' blind bagged rubber TsumTsums. The figures are okay but it's the little diorama bases that have locked me in as a completist. I abhor blind bags, but at least the bases help make it kind of easy to feel out what character you're holding. Here we get some welcome continuations on movies/themes and the start of new ones (Muppets!?). Pinocchio is a quite welcome addition and I like his puppet theater base, but it's scaled for the micro size, which is annoying. Surprisingly we get Tiger Lily from Peter Pan who sits atop a big tom-tom drum... The chameleon from Tangled and Sally come with neat bases that they can fit "between" but the tops also plug in to the bases to complete look of the turret and jar, a very nice, welcome touch. The real stars here, though, are Snow White and Abu! She comes with her poisoned apple (and the translucent blue poison skull IS removable) and his base is a big giant version of the Cave Of Wonders idol, complete with removable gem! Love it! 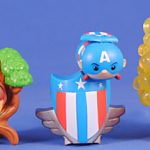 Filling in some holes here. Squirrel Girl has been remarkably hard to find but she turned out pretty neat! WW2 Cap is okay... nothing special (and the shield base is thinner than I expected from the package photo). Green Goblin is just a bummer though, a straight re-coloring of the awesome Hobgoblin base from Series 1; but while that one was orange pumpkin and green gas cloud, this one is yellow gas and... purple pumpkin!? Ugh. The goblin is a neat new figure, though, but the base is just such a buzzkill. 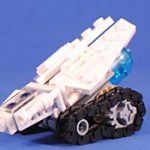 Target exclusive polybag with a micro version of one the big vehicles from the Ninjago Movie. I'm not really into Ninjago, the movie or most of the sets, but this is a fun little polybag build. In fact, it kind of reminds me of the great Galaxy Squad from a few years back. The cockpit is weirdly off center in this build though, but the hinged and angled back look pretty cool. The big star here, though, are the awesome treads! Apparently this is only the second time they've seen release, and you get quite a bunch with 15 pieces in each tread. They clip together pretty well and roll surprisingly well. I think I'm definitely going to have to get a couple more for MOC-ing! 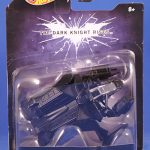 Back when this "larger scale" of Batman diecast vehicles was new I collected them all, and kept them carded for pushpin displaying. They recently made a comeback with the Batmobile from BvS, which I got out of completionism. Now there's a new series and it's got the Justice League Batmobile and this Bat from Dark Knight Rises. I'm pretty certain this is a brand new release so I was sure to snag it as it's likely to be a hot item for this line. Like I said, I don't open this line, but it looks good on the card and... well it is part of my Spoils of this week. 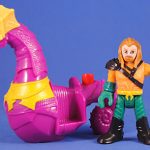 New Imaginext! Woot Woot! I'm not a big fan of the movie look of Aquaman, but I am a big fan of Aquaman, and I gotta admit this hybrid of the two looks is pretty snazzy. For reasons of filler-ness he comes with a big purple seahorse to ride. It's goofy, especially with this version of Aquaman, and it's not as fully painted as the sculpt would suggest it was meant to be, but when you push the red button the head/neck lean forward a bit, so that's kinda fun. Aq is a good figure, but I do wish he had a thrown or another figure with him inside of this straight-to-the-box seahorse. But... what're ya gonna do? Daddy needs his man of aqua. 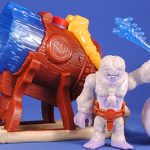 In addition to the awesome new Egypt line there is a cool new Yeti/Himalayan line. Much like the Aquaman set above, we get a cool figure and a mediocre pack-in. The cannon is okay but not that exciting, but at least the snowball it launches is actually an uneven ball so it does play as a snowball rather than just the ping pong ball it could have been. The Yeti is a nice, new, unique sculpt. He sadly lacks neck articulation, but its understandable given how bulky he is. Bulky, and tall - a bit larger than the standard Imaginext figure, which is a very welcome touch. It's cool, I just don't really dig the cannon. 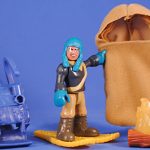 Here we get a mountain climber loaded with neat accessories! His sculpt is nice and I particularly appreciate eh tan skin tone. He comes with a big cloth sleeping, two giant snowshoes, a flaming log campfire and a big ol' backpack. What's particularly cool is that all the accessories fit on/in the backpack! It was kinda tough to figure out how it all works, though, as the log fits perfectly under the clasps on the top, but then the guy has a fire on his back. Playing around a little bit I figured out that the backpack is hollow so that it can conceal the fire when the log is plugged into the bottom. The sleeping bag rolls up under the top and the snowshoes plug in to the holes on the back - a nice, neat package! 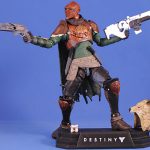 I know next to nothing about videogames, but Destiny has always stood out with its Halo-meets-Medieval armor designs, so I was pleasantly surprised to see McFarlane's new figures out on shelves. Even better, they've come through the dismal first year of "Color Tops" and ditched that infamous 'Just A Statue' approach for actual toys! This guy is like a scaled up Halo figure and has a pretty good range of articulation. He's got balljoints in most places that work fairly well (though the shoulders and hips are restricted by the pauldrons and skirt). The sculpt is really good and I like the paint a lot. The very Medieval-y look of this dude is quite appealing, and the wolf-skin hood is an interesting new addition to the world of space armor. The hood is fully removable, which is nice because I quite like the helmet, but that also means sometimes it sits kind of awkwardly based on the pose. He comes with a decent, generic little base - it only has one foot peg which makes sense because the figure ONLY has a peghole on the left foot... that is kind of frustrating and seems like a thoughtless move to limit pose/base options. He gets two different guns; one is a sort of futuristic sawed off shotgun type thing and the other is a white sci-fi rifle. Annoyingly, they've gone back to those dumb accessory pegs from the Halo figures... for a company so utterly hung-up on accuracy it's so weird that they opt for a system so aesthetically unpleasing. Finally, there's a tiny little angled box thing. I assume it's significant in the game, but it doesn't fit in the dude's hand nor is there a place for it to hover on the base, so it'll definitely be lost sooner rather than later. Overall, though, I really dig this figure and will quite likely pick up a couple more. If you are/were a fan of the McFarlane Halo figures, then this toy is for you! 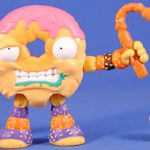 Everybody's talking about them and I finally found them! These are SUCH an absolutely wonderful throwback to the toys of the '90s! It's so fresh and exciting to toys that don't tie-in to a movie or show or game while also being well made - and affordable! These things are only like $7! They're wholly unique sculpts, pretty well articulated and all get accessories! This donut guy has balljointed shoulders and hips, nunchuks made out of churros! He comes with a little donut sidekick. Not bad! I mean, look - all of his sprinkles are individually painted! Just compare that to a Playmates TMNT figure! 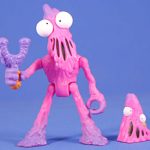 This guy is wicked cool! A gum man/monster! The bright pink plastic with light purple shading looks surprisingly good, along with the big googly eyes! Balljointed hips and shoulders plus a ball-and-socket head joint all allow for a reasonably amount of posing. Best of all, all the little sidekicks, which are cast in a very squishy rubber, have big pegholes underneath that fit the neck balljoint, essentially meaning the sidekicks are also alternate heads! How great is that!? 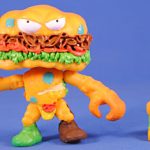 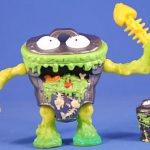 Next/lastly we have what, to me, is the icon of the line - a trashcan monster dude! I really like the look of this dude - shiny gunmetal gray for the can and lid with yellow/green sludge limbs and accents! He's only articulated at the shoulder and hips despite having a recessed mouth. I had hoped/expected that the "head" would be hinged so you could open the mouth wider, but alas, no such luck. Still, though, he's an awesome sculpt and figure! If you get only one Grossery Gang figure - make it this one! 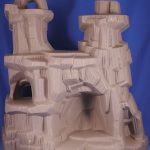 I've been looking for this for a while and it recently popped back up on Amazon for a mere $20! It's gone up kinda high on the secondary market. It's been a great display piece for a lot of smaller indie toys like mini-figs and Glyos stuff. I quite like the style/aesthetic of this design/sculpt, the only issue is that all the "flat" surfaces are slanted forward a bit, making it kind of hard to keep stuff standing on it - which is a real bummer. I like the look of it so much that I'd really like to see it run in a variety of colors for different environs (desert sand, martian red, alien purple, arctic white, etc.) but that slanted surface stuff... it's just frustrating. Still though, it's a neat backdrop and a good way to display a variety of smaller stuff.

This entry was posted in Rustin's Spoils of the Week and tagged Aquaman, Batman, Grossery Gang. Bookmark the permalink.