Trust the Walking Dead Wednesday the way you'd trust your own best friend.

Shane was Rick's partner in the King County Sheriff's Department, and was with him the day he was shot by a fleeing criminal. Promising to take care of Rick's family while he was hospitalized, Shane became the defacto 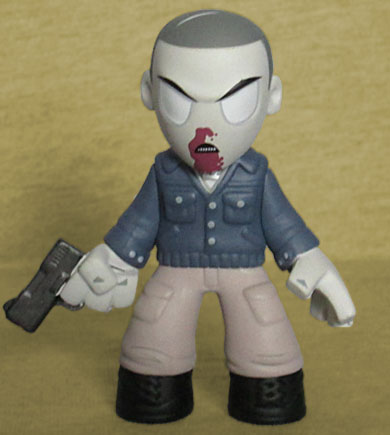 Then again, maybe he was. Who are we to judge?

The "In Memorium" Mystery Minis that show humans (rather than zombies) depict them right at the end, so Shane's figure is wearing a blue jacket, cargo pants, and black military boots. The jacket has numerous snaps on the pockets, sleeves, and down the front, and he wears his "22" necklace (his number from football, because you know only the best people spend their entire life dwelling on their high school accomplishments). His head is shaved, allowing us to see the scar that was evidence he killed Otis, and there's blood pouring from his nose. 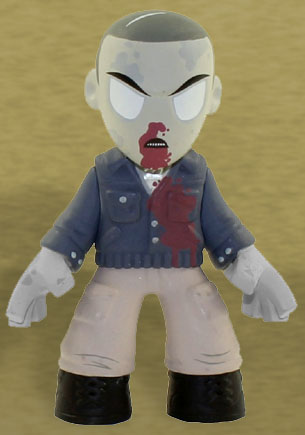 It's hard to avoid Shane, because he's packed in a 1:6 ratio, meaning every case has two of him. Much rarer is the 1:72 Walker Shane, which uses most of the same mold, simply trading out the right arm - normal Shane is still holding his gun, while undead Shane has two empty hands. (Jon Bernthal revealed that in the scene, Shane's gun was empty: he hadn't brought Rick out to the woods to kill him, he'd brought them out there to force Rick to kill him, and thus step up to become the leader the group needed.) The zombie's face is also painted with some dirty splotches, and there's blood on his chest, but since the In Memorium figures are all done in such desaturated colors, there isn't a huge difference between the two the way there was for, say, Hershel. In other words, don't go crazy trying to find the chase variant.