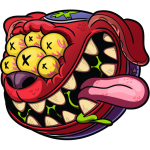 HE CAME FROM OUTER SPACE! But fear not, Slobbernaut isn't into world domination, he's just a sweet puppy who wants to lick your face. Now if only his saliva wasn't toxic to earthlings... 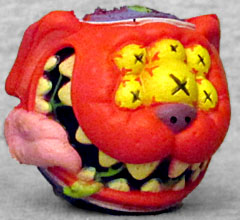 So far this year I've read 80 books. Well, 79½ - I'm currently in the middle of War and Peace, which is slow going. But of all those, the most emotionally affecting one was easily Laika, the story of the first dog in space. You can read it for free online, but be warned: Laika makes Fry's dog Seymour look like a knee-slapping comedy by comparison. While the book stays true to the real history, the "director's cut" offered some alternate endings that changed things up. And though Slobbernaut's bio claims he comes from space, well, there's no saying whether he was on Earth before that.

This pupper is mostly a bright orange, but wears a purple skull cap with a green rocket on top. Yes, very much like Freaky Fullback. His mouth is open, and his tongue is lolling back like he's riding with his head out the window. Clearly being in space has mutated him, because he's now got six yellow eyes above his nose, and seven more bursting out through the back of his space suit. So many eyes! Although Slobbernaut is a new design created by Just Play, he feels right at home among the more classic characters.