It's the end of the year, so this is going to be half review, half look-back. You've been warned.

Recently here in the OAFE office, Shocka and I were talking about how everyone regarded 2016 as a really bad year, and he asked if I thought 2017 had been worse. Personally, I do not: yes, bad things are happening (or it's coming to light 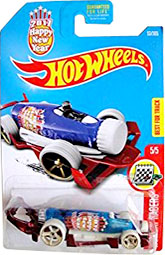 that they happened before), but ultimately it's good. Someone joked that in 2017, if you saw a celebrity's name trending, you freaked out for an entirely different reason than you did in 2016. Do I want Louis CK or Kevin Spacey to be sex perverts? No, of course not, but I'm glad that their victims no longer have to hide it. But hey, how about a souvenir to remember 2017 by?

I've been trying to find a Carbonator ever since Rustin taught us it existed, with no luck - I just never seemed to see one on the pegs. But the same trip to Five Below that brought us El Diablo also brought us "Holiday Racers" car #5 of 5, a Carbonator wishing us a 2017 Happy New Year! Because yes, let's celebrate the year in which nary a week went by when we didn't all have to waste our time calling our representatives and telling them to stop actively working against the good of society. I've spent more time on the phone with my senators this year than I have with my family.

The Carbonator has been released more than a dozen times already, always with a new colorscheme. This one is a very pleasant red, white, and blue. The base chassis is a dark metallic red, while the upper "bottle" body is a translucent blue that allows the chromed inner workings to be seen. The fact that the wheels are bright white definitely makes this feel like a special release, rather than a standard road vehicle - 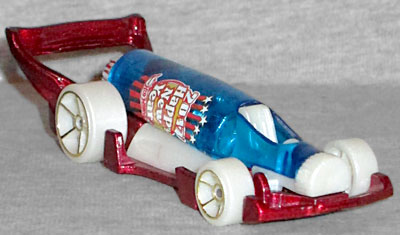 no working vehicle could keep its tires that clean!

Speaking of being dirty, 2017 was the year that the Republican party fully outed themselves as the human garbage everyone had long suspected/accused them of being. Faced with the option to put the good of the country above the good of the party, they bravely closed ranks and publicly threw their support behind an ephebophile, because the alternative meant they wouldn't be able to pass a bill that cuts taxes for the super wealthy and raises taxes on you. Republicans went all-in on a serial child abuser. And then he lost anyway (thanks mainly to the turnout of black women).

Granted, the revelation of GOP scumitude probably won't stop any of their base from sticking with the party out of ingrained bigotry or sheer gullibility, but if nothing else, 2017 made it so the next time anyone claims that "both parties are equally bad," you're absolutely justified in slapping them in the eyes. When one party is the party of child predators and the other is the party of "not child predators," they're not equivalents, no matter how much tepid

both-sidesism anyone tries to apply. You can't be neutral on a moving train.

In the three years between when Rustin found the Carbonator and when I did, I'd completely forgotten that it serves as a functional bottle opener - the rear spoiler is wide enough to fit over a bottle cap and pry it loose. Makes me wish I had some bottles here to try it out! Because what says "2017" more than feeling

the urge to drink heavily?

2017 was also the year that Conservatives got mad when I called them dumb, but remained steadfastly silent when the president they voted for went on TV to take the side of literal Nazis who killed an innocent woman on the streets of an American city. When a single terrorist shot nearly 600 people in 10 minutes, but Congress did nothing. When American citizens were functionally abandoned after Hurricane Maria leveled their home. Yeah, 2017 was a real peach.

There were actually two New Year's 2017 Carbonators available: the "Holiday Racers" one in this review, and a second in Walmart's "Holiday Hot Rods" exclusive series (which was technically a 2016 release, since it came out in time for Christmas). Instead of red, white, and blue, the exclusive was red, yellow, and green, and instead of saying "2017 Happy New Year," it said "Happy New Year 2017." 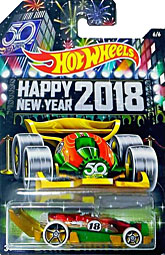 And just last week, I learned that there's a 2018 version as well, again a Walmart exclusive - apparently the Carbonator mold has become Hot Wheels' go-to release for New Year's, with a version available every year since 2012. Have fun with that, completists!

2017 turned every woman you know into the diamond-hard, flame-forged, best version of herself. An outstanding wave of bravery saw women refusing to any longer ignore the horrible shit that men expected them to accept. In which total creeps complained that they weren't allowed to be total creeps anymore, and no one felt even remotely bad for them. If "important" men lose their positions because they sexually harassed someone, the world won't be any worse for it: the lone genius is a myth, and if we push those a-holes into obscurity, other, better people will rise to take their place. Like they say, the cemeteries are full of indispensable men. 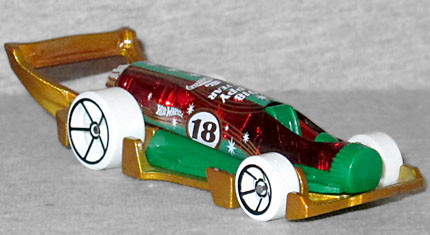 this year's "golden frame, green body, red bottle." It's definitely a festive and Christmas-y pattern, with ornate stripes in green and white tampoed on the bottle, as well as a big "18" in a circle, so we can remember the year, and a cute snowman, because winter. Sadly, the large "50" the card art shows on the front end didn't make it onto the real toy; sure, it would have been small, but it would have been an appropriate honor for the brand's golden anniversary. 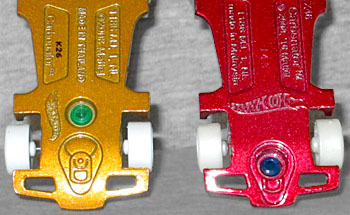 There's a slight molding difference between the HNY17 Carbonator and the HNY18 one: the front rivet that holds top and bottom of the car together is set further back on this year's, allowing you to better see the soda can tab that's molded under there (a nod to the fact that the front bumper can be used to pry up stubborn tabs, in case you don't have any fingernails).

Maybe 2017 was a good thing after all; you know, the same way that finding blood in your toilet bowl is good, because it finally gets you to go talk to your doctor about that pain you've been having. Maybe America needed President Fuckhorn Muchango to make us face just how corrupt Republicans are. Maybe white people needed a racist to make us realize that white supremacy isn't a thing of the past, and maybe men needed a sexual predator to make us start believing women. Maybe we all, as a whole, needed to realize just how sick we were before we could start to get better. 2017 isn't a cause, it's a symptom.

The Carbonator doesn't fit with my usual Hot Wheels collecting theme of "works with Lego," but that's okay: you never know when you might need a bottle opener, and it's better to have a fun one like this than just a regular old version. I just need to find a magnet so I can stick it to the fridge.

2017 is over. If you're reading this, you made it through the crucible, and that's no small feat. Take a moment to appreciate your victory. And then get ready to kick the damn door in on the new year!